3 Steps to Scaling Up Nature-Based Solutions for Climate Adaptation

This article from WRI focuses on the importance of nature based solutions, a topic we’re particularly fond of here at Porto Protocol, as a means of mitigating Climate Change.

In Indonesia, climate change is already a pernicious threat. More than 30 million people across northern Java suffer from coastal flooding and erosion related to more severe storms and sea level rise. In some places, entire villages and more than a mile of coastline have been lost to the sea.

The flooding and erosion are exacerbated by the destruction of natural mangrove forests. These forests absorb the brunt of waves’ impact, significantly reducing both the height and speed of waves reaching shore. And mature mangroves can store nearly 1,000 tons of carbon per hectare, thus mitigating climate change while also helping communities adapt.

Without mangroves, 18 million more people worldwide would suffer from coastal flooding each year (an increase of 39%). That’s why in Demak, Java, a diverse group of residents, NGOs, universities and the Indonesian government are working together on the “Building with Nature” project to restore a 12-mile belt of mangroves. The project, managed by Wetlands International, has already improved the district’s climate resilience, protecting communities from coastal flooding and absorbing carbon dioxide from the atmosphere. 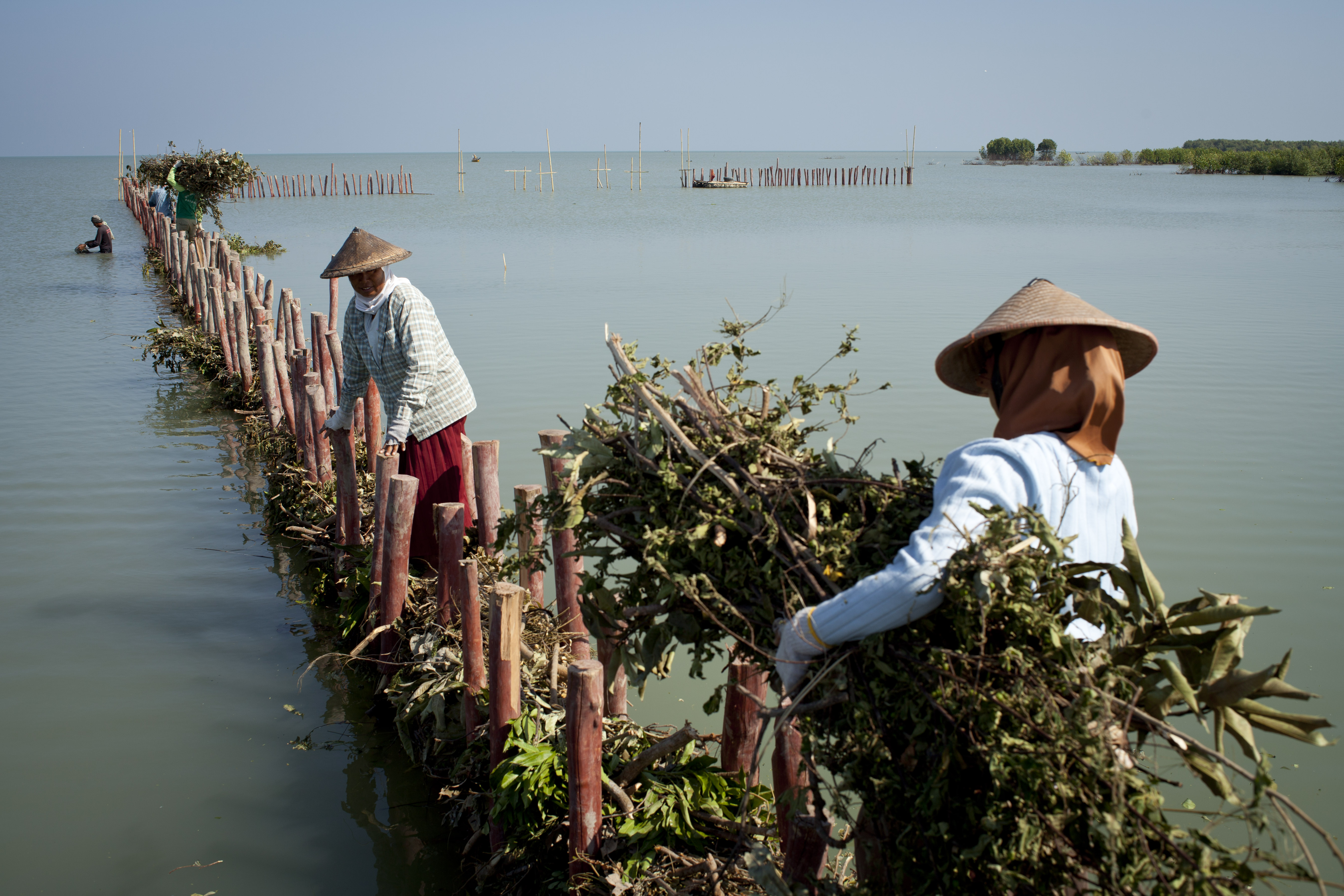 Local communities in Demak help construct temporary barriers from poles and brushwood. This will allow mangroves to regenerate naturally, which will protect the hinterland from further erosion. Photo by Nanang Sujana / Wetlands International

Java isn’t the only place where nature-based solutions can make a difference. Countries around the world can harness the power of nature to adapt to climate impacts. Coastal wetlands can defend communities from storm surge and sea level rise. Well-managed forests can protect water supplies, reduce wildfire risk and prevent landslides. Green space in cities can alleviate heat stress and reduce flooding.

While we don’t yet have a full accounting of this potential, we do know that, for instance, wetland ecosystems cover approximately 8% of the planet’s land surface and the ecosystem services they provide — including flood protection, fisheries habitat, and water purification — are worth up to $15 trillion. For example, offshore fisheries in areas with mangroves provide fishermen with an average of 271 pounds of fish (worth approximately $44) per hour, compared to an average of 40 pounds (only $2-3 per hour in places without mangroves). 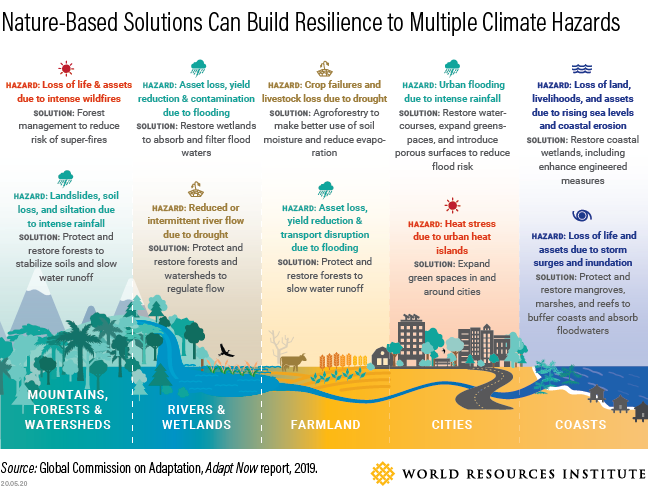 No matter the landscape, countries can use nature-based solutions to build resilience and protect communities from the impacts of climate change. Photo by the Global Commission for Adaptation/WRI

Yet despite nature’s ability to provide vast economic and climate resilience benefits, many countries are not fully utilizing nature-based solutions for adaptation, according to research by the UN Environment Program World Conservation Monitoring Centre (UNEP-WCMC) produced for the Global Commission on Adaptation. Of 167 Nationally Determined Contributions submitted under the Paris Agreement, just 70 include nature-based adaptation actions; the majority of those are in low-income countries.

The Global Commission on Adaptation is working with leading organizations and countries, including the governments of Canada, Mexico, and Peru, the Global Environment Facility, and the UN Environment Program, to scale these approaches globally through its Nature-Based Solutions Action Track. According to the Commission’s Adapt Now report — which builds on UNEP-WCMC’s research — there are three crucial steps needed to make this happen:

1. Raise Understanding of the Value of Nature

Policymakers need to better understand the value of natural capital like mangroves and other ecosystems that provide important benefits for communities. For example, it can be 2 to 5 times cheaper to restore coastal wetlands than to construct breakwaters ­— artificial barriers typically made out of granite — yet both protect coasts from the impact of waves. The median cost for mangrove restoration is about $0.01 per square foot. This is far less than the often prohibitive cost of most built infrastructure. Mangrove areas yield other benefits, too, as illustrated by the effect on fisheries. In fact, the Commission found the total net benefits of protecting mangroves globally is $1 trillion by 2030. 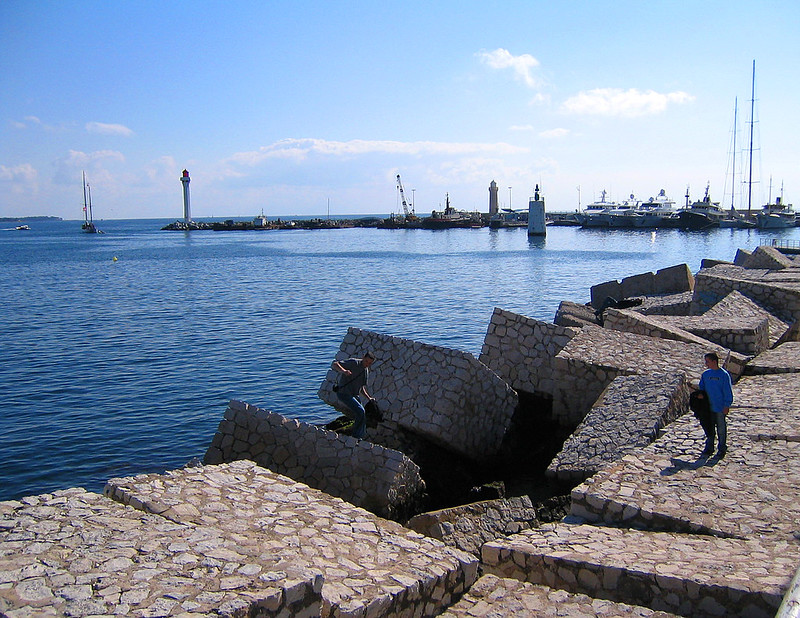 While many coasts are lined with artificial breakwaters, restoring coastal wetlands would also protect shores at a significantly lower cost. Photo credit to Mikko Lahti/Flickr

While some research of this kind exists, countries often need place-specific assessments to identify the best opportunities to utilize nature-based solutions for adaptation. Governments should also consider that local and indigenous communities often have ample understanding of nature’s value for people, and should seek out and include this knowledge in plans and policies. The success of the “Building with Nature” project, for example, relied on the full involvement of local residents.

Nature-based solutions often work best when people use them at larger scales — across whole landscapes, ecosystems or cities. Governments are often best placed to plan climate adaptation at this scale given their access to resources and ability to make policy and coordinate among multiple actors. To be successful, they should include nature-based solutions in their adaptation planning from the start.

Mexico’s approach to water management highlights how one way this can be achieved. Water supplies are especially vulnerable to climate change, as shifting rainfall patterns cause droughts in some places and floods in others. Mexico is proactively protecting its water on a national scale by designating water reserves in more than one-third of the country’s river basins. These protected areas and wetlands cover nearly 124 million acres and ensure a secure water supply for some 45 million people downstream.

This approach can work in many other places. Research on cities’ water supplies shows that by conserving and restoring upstream forests, water utilities in the world’s 534 largest cities could better regulate water flows and collectively save $890 million in treatment costs each year.

Communities and countries often cite access to funding as a barrier to implementing nature-based solutions, and to climate adaptation efforts overall. But, as UNEP-WCMC highlights, governments can spur investment in these approaches by reorienting their policies, subsidies and public investments. They can also better incentivize private investors to finance adaptation projects.

Many governments, private sector, and philanthropic actors have funds that could be used for nature-based adaptation solutions — but a lack of awareness has hindered their widespread use. Part of the solution is helping communities and countries better understand what funding opportunities exist, learn from successful financing models, and identify gaps that could be filled by interested donor countries, development institutions, and private investors — an effort the Commission is undertaking. 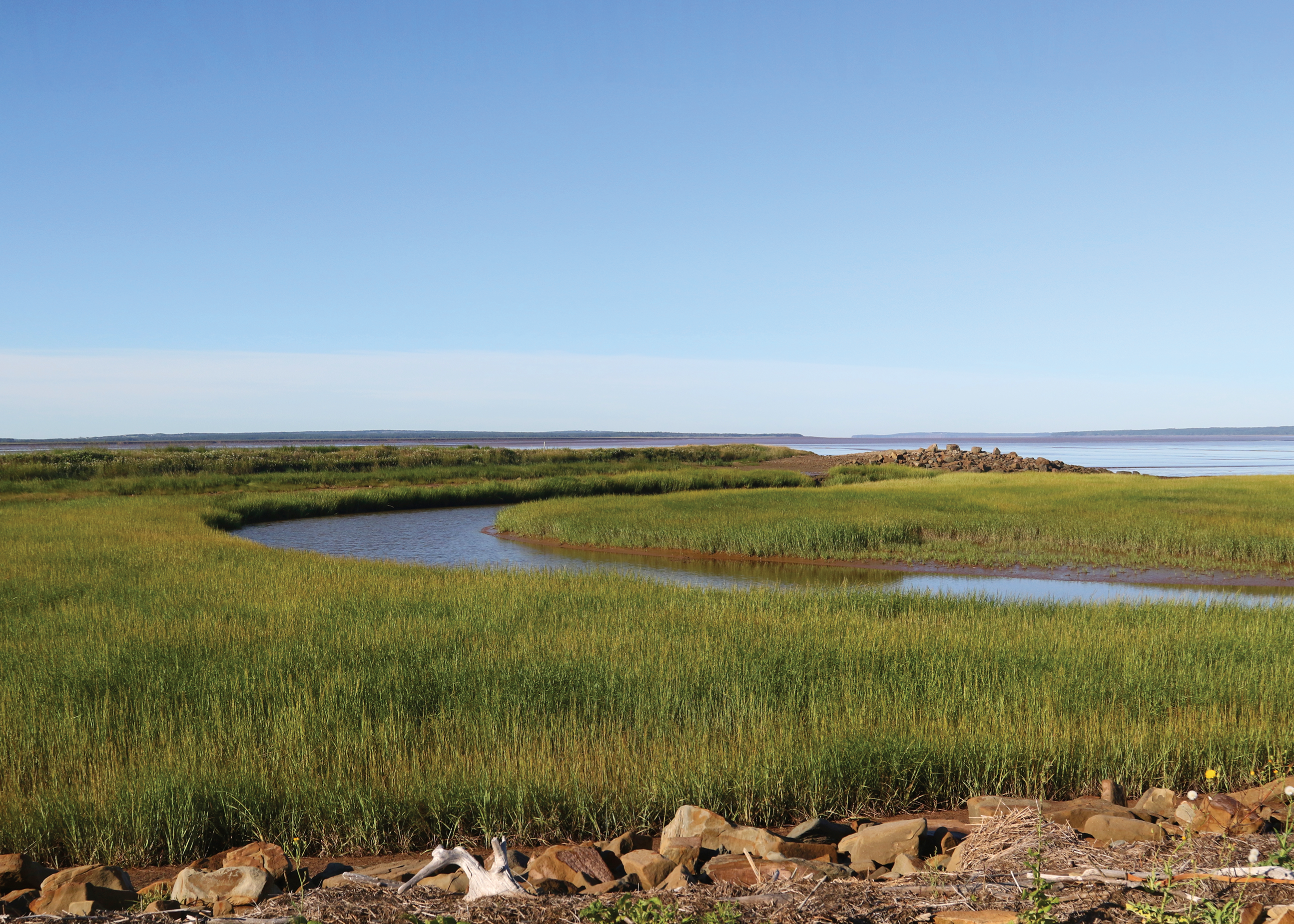 Salt marshes, like this one in Nova Scotia, are a nature-based solution that can reduce coastal flooding and protect communities. Photo credit to Trish Hartmann/Flickr

Canada’s $1.6 billion Disaster Mitigation and Adaptation Fund is one example of a public financing approach. This fund helps communities manage risks from floods, wildfires, droughts and other natural hazards by providing investments in both green (nature-based) and gray (built) infrastructure. Much like the mangroves in Indonesia, Canada has its own coastal wetlands that protect its coasts from sea level rise. The Fund recently invested $20 million into a project that is restoring salt marshes and improving levees along the Bay of Fundy in Nova Scotia. Once complete, the Bay of Fundy project will reduce coastal flooding that affects tens of thousands of residents, including indigenous communities, as well as World Heritage sites and more than 20,000 hectares of farmland.

The benefits of nature-based solutions go far beyond climate adaptation. From the heart of the city to vast forests and coastal wetlands, healthy ecosystems underpin societies and economies. They provide food, fuel, and livelihoods; sustain cultural traditions; and offer health and recreation benefits. Many of these solutions actively remove carbon dioxide from the atmosphere, serving as climate mitigation strategies as well. They also provide critical habitat for biodiversity.

The Global Commission on Adaptation is establishing a group of frontrunner countries, cities, and communities to highlight successes, stimulate greater commitments and increase attention to nature’s underappreciated role in climate adaptation. By taking these steps to scale up nature-based solutions, we can realize the potential of nature to advance climate adaptation and protect those most likely to be affected by climate change.

What will we learn: Our May Newsletter

The Climate Phenomenon that Produces Wines with ‘Electric Acidity’