This case study is divided into three parts:

1. A BRIEF BACKGROUND ON CARBON CAPTURE AND HOW TO PREPARE YOUR WINERY

The Paris agreement stipulates zero emissions by 2050. Carbon capture will be key to reaching this goal.

How much carbon dioxide does an alcoholic fermentation release?

As I write this, the Domaine Dujac winery is under construction, due to be completed for the 2022 harvest. Production size of Domaine Dujac releases roughly 10T of carbon dioxide annually during fermentation. We cannot hope to capture 100% of this. Only carbon dioxide harvested from tanks has been successful. Barrel fermentation capture has been attempted but is too messy to be practical. We have elected not to attempt the capture of CO2 from barrel fermented white wines. Furthermore, we deduct 10% of the carbon dioxide from our red fermenters which inevitably will be lost when we manage the extraction of our reds (punch-downs and pump-overs). This leaves us with a rough estimate of 8T of carbon dioxide we can capture per vintage.

The options for carbon dioxide capture are multiple and developing (detailed below). The first thing every winery can do is plumb their winery to evacuate CO2 to one central location. This way they you ready for the option that best suits your situation as technology develops.

Plumbing for CO2 evacuation is simple and low investment. The cost of stainless steel and PVC plumbing was 24K euros for our 29-tank winery (sized 35 to 73hl). Chateau Montrose used only PVC plumbing and spent 7500 euros for 60 tanks (sized 45 to 200 hl).

The physical properties of CO2 lend it to capture. It is a heavy gas that collects between the top of the cap and the top of the tank. All but rudimentary CO2 capture techniques involve a CO2 compressor. Because of this, the set-up must manage 1) the pressure of the emerging CO2 and 2) condensation.

A flexible tube is attached to the lid on the top of each tank. At least 30 cm of the tube must be attached at a 45-90° angle so that condensed water and alcohol run back into the tank. Should this liquid run into the CO2 circuit it would mold in the lines. 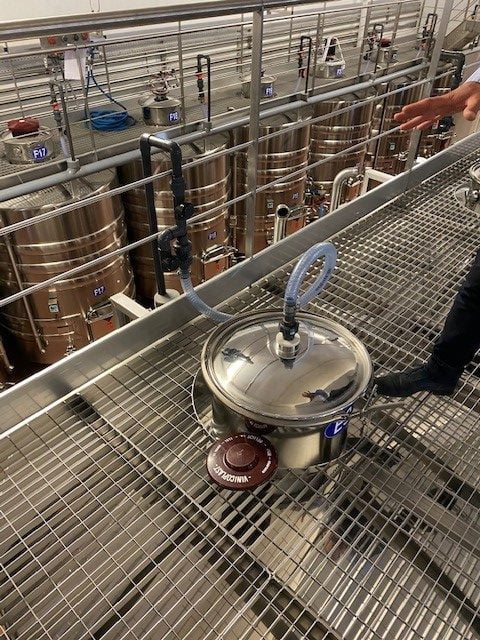 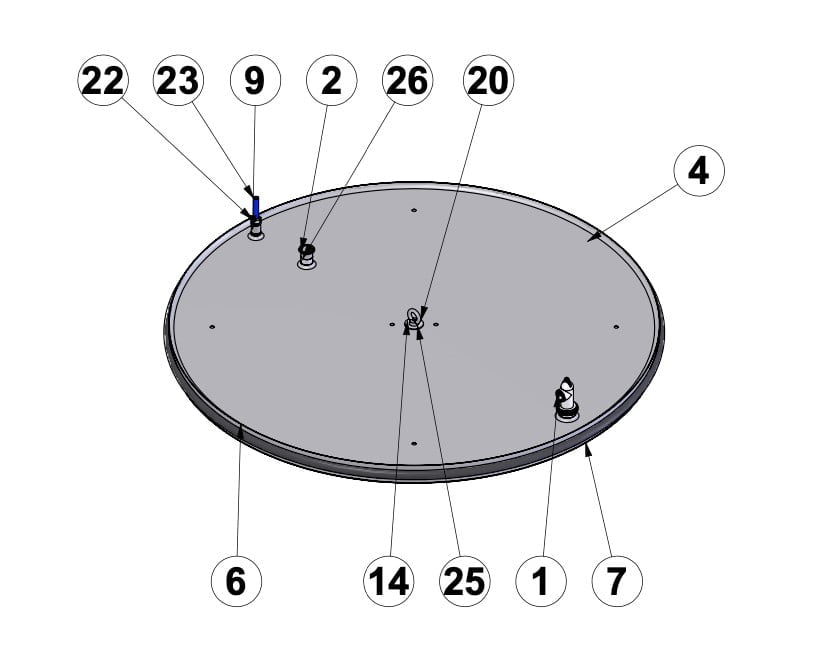 In Burgundy, where we favor punch-downs for extraction, our tanks are open-top. Every time we operate a punch-down or pump-over, we must open the tank, inevitably losing a bit of CO2, and then re-seal it after we finish the operation.

A 38 mm clamp diameter opening is adapted for the pressure coming from 30-200hl tanks.

The flexible hose from each tank attaches to a central line, which is stainless steel in our case but can be PVC.

At both the juncture of the tank to hose and the hose to the central line there is a backflow damper to prevent CO2 from flowing backwards into the tank. Additionally, each of these hoses has a valve to open and close at the start and finish of fermentation.

As a security measure the central line has an opening at the far side so that when the compressor is running, any surplus negative pressure that could arise will come from the winery and not from a closed tank. 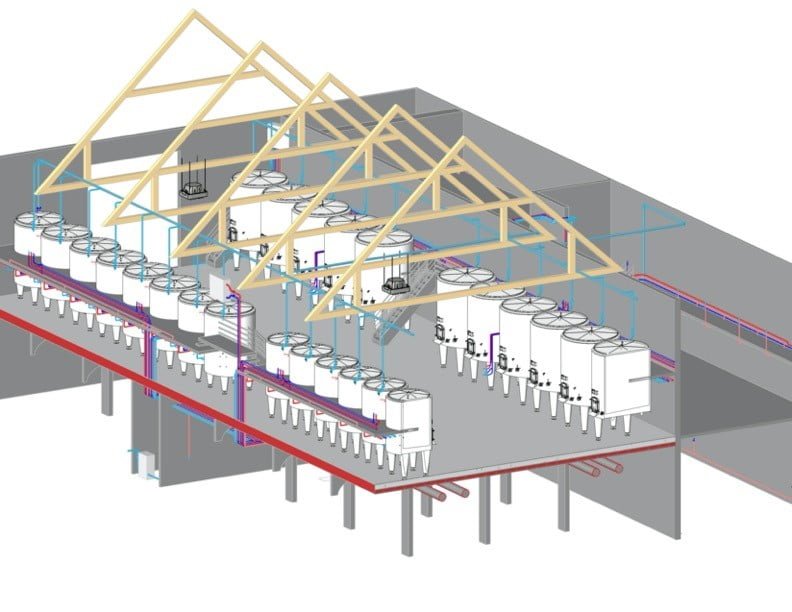 This is our winery plan. The light blue lines above the tanks are the CO2 evacuation lines. The far-left pipe has an opening which can be opened when the compressor is running. All the CO2 is evacuated to the central line on the right of the tanks. The pipe goes outside where the CO2 compressor and capture apparatus will stand.

The central line leads to the edge of a building where it passes through the wall to an area outside. The placement outside should have about 3*3m of space to allow for a compressor, carbon capture equipment and free movement.

This is all the infrastructure we are planning for the moment. With this plumbing in place, all our CO2 evacuates to one central location.

Ten years have gone by during which time large wine producers have been aware of the opportunity to trap fermentation carbon dioxide and until recently have elected not to. The reasons are multiple:

For starters, when one runs the numbers, 11.5-13.2 kg of CO2/hl of wine is tiny. In the grand scheme of a winery’s emissions, it is dwarfed next to CO2 generated for our bottles or transportation footprint for sales and marketing. The conclusion of our past, throw-away mentality is that it’s just not worth the trouble. However, this point of view is shifting as we all figure out how to get our industries to zero or negative emissions.

Then, like all prototypes, these installations are currently quite expensive. Moreover, to this day, any carbon sequestering during fermentation will not count as a deduction on a wine companies’ carbon emissions report. If a company chooses to tackle this endeavor, there is no tax break or formal recognition of this costly effort.

Current carbon calculations argue that all the carbon dioxide released during fermentation (and released after we enjoy & metabolize wine!) was absorbed by the vineyards that generated that fruit during the growing season. This brings farming and fermenting/metabolizing to a net zero, like all organic carbon cycles. Buried even deeper, in the situation of grape sales, there is disagreement as to who would own the negative emissions of grape growing: the grower? Or do negative emissions belong to the fruit and the winery that buys the fruit?

This combination of the need for new infrastructure and lack of supporting policy have led to us all to inevitably blowing CO2 right out the windows.

3. OPTIONS FOR CARBON DIOXIDE CAPTURE AS OF MARCH 2021

What vehicle to choose to carry your carbon dioxide? There are multiple physical, organic and inorganic pathways for carbon dioxide capture. This nascent industry is developing by the day.

Move your CO2 during fermentation

This simple, low budget technique is already being used by many but is worth mentioning. As the first fruit arrives and ferments, a hose moves the emerging CO2 to an empty neighboring tank so that the oxygen is already eliminated before filling the tank with fruit. This reduces the cost and emissions of dry ice (though it does not cool the must).

Similarly, should you happen to farm crops in a greenhouse in addition to making wine, you can save your CO2 in an empty tank and meter it out into the green house over the year. This must be calculated and is only appropriate for small wine production relative to a large greenhouse operation. It has been suggested in areas where this is legal, like California, that CO2 could be saved and metered out in marijuana greenhouses, for example.

CO2 in a bottle

For decades, the beer industry has been practicing capture of fermentation carbon dioxide for carbonation pre-bottling. Enomet in Italy sells a carbon dioxide purification and compression machine designed for wineries.

Another emerging alternative process for CO2 is methanation, transformation of CO2 and hydrogen into methane using methane-producing microorganisms. Methane made in-house can be used to power forklifts and tractors. Bodegas Torres are exploiting this method on a trial scale.

This is the option we are electing to use and so this process explanation is the most complete. Alcion Environnement’s (recently acquired by Veolia) uses carbonate, either sodium carbonate or potassium carbonate to bind carbon dioxide and produce sodium bicarbonate or potassium bicarbonate. This method has been used by Smith Haut Laffite and Chateau Montrose since 2013 and 2018 respectively.

Alcion rents a winery their equipment during harvest and offers the service of selling the bicarbonate generated from fermentations. The value of the bicarbonate is minimal; however this solves the problem of what to do with the 3.7 tons of sodium bicarbonate or 4.5 tons of potassium bicarbonate produced from every ton of CO2 captured.

The advantages of this option is that you can use all the CO2, from beginning to the end of the fermentation as the purification process is not critical (unlike CO2 compression). Secondly bicarbonate is the most stable, safe vehicle for CO2.

On the other hand, all carbonates are mined. All bicarbonates are turned back into carbonate by heating (requiring energy) and so the yield is 80% net negative CO2 emissions once you count the energy required for various transformations. It is important to highlight that for inorganic carbonate methods to be truly sustainable, the bicarbonate would leave our wineries for biofuel production (rather than plastic production or pharmaceuticals). The CO2 would become biofuel yielding carbonate once again which should be returned to the winery for the following harvest, to eliminate further mining. In order for any industry to be sustainable, inputs and outputs must be balanced and cyclical as in nature.

While we are committed to trial CO2 capture beginning in 2022, it must be acknowledged that the above options are laborious. They require a second industry running at the same time as harvest and vinification, our most intense workload of the year. Moreover, unlike cement production, we only generate CO2 one month of the year. The other 11 months this expensive equipment collects dust.

Independent of wine production, direct air capture, DAC is an emerging technology we are all going to hear more about. DAC will be necessary to keep atmospheric concentrations of carbon dioxide in check as we transition to alternative energies and to mop up decades of carbon dioxide emissions. DAC facilities suck air into a refinery where the CO2 is peeled out of the air and the rest of the gasses are returned to the atmosphere CO2-free. These factories are designed to run on green energy, yet much of this energy is wasted concentrating atmospheric carbon dioxide, 415 parts per million, to pure carbon dioxide. Meanwhile our alcoholic fermentations release pure CO2. (The companies I am aware of are, Climeworks and Carbfix release CO2 far underground where it re-calcifies naturally to become stone and sell this service as carbon offsets and Carbon Engineering in Canada which practices carbon capture and reuse, CCR. This means they transform atmospheric carbon dioxide into biofuels.)

It seems to me that the future of carbon capture will be to plumb our viticultural areas to move compressed carbon dioxide to one central carbon recycling center.  This factory could store and process CO2 to biofuel throughout the year. While Domaine Dujac could capture 8T per year, the communes of Gevrey Chambertin, Morey Saint Denis and Chambolle Musigny could capture 360 T of CO2 per year. All of Burgundy could capture 166,000 T, the entire viticultural area of Bordeaux 770,000 tons of CO2 per year. These represent real, impactful CO2 reductions.

Up until 150-50 years ago we all dumped our sewage into rivers and thought nothing of it. Then rivers lit on fire and people were sick with dysentery and governments organized plumbing and waste stations to handle human sewage. There will come a day when the wine industry will be required to manage our carbon dioxide waste as well. When this day comes it will seem the civic, logical thing to do. It is just a matter of time and perspective before all alcoholic fermentations include carbon dioxide recycling.