The Municipality of Porto, in line with its Municipal Strategy has begun an ambitious programme to renew its municipal fleet, involving a total of 390 vehicles, of which more than 70% will be electric, compared with the fossil fuel currently used by the fleet. This paradigmatic shift in the municipal mobility of Porto will enhance the relevance of Porto to the electrification of the transport sector at national level. 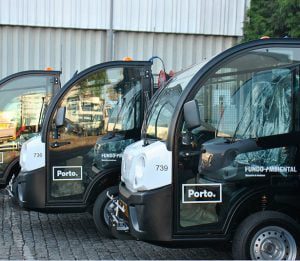 The Municipality of Porto bases its commitment on the growing concern for the environment and the promotion of decarbonized travel modes, combined with awareness that the transport sector constitutes one of the greatest contributors to pollution in cities, not only through noise but equally by volume of emissions and other atmospheric pollutants. For this reason, the Municipality shares this sense of responsibility and considers it its duty to contribute to the electrification of mobility systems in the city.

This behavioural shift was supported by a series of studies carried out by Ceiia (Center of Excellence for Automotive Innovation) that helped the Municipality to evaluate and decide on the viability of this paradigm shift. 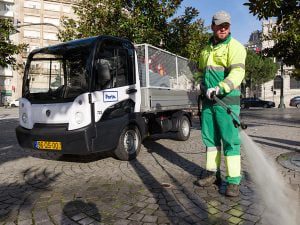 This change is expected to reduce the consumption of fossil fuels by about 450,000 liters / year and will result in an estimated saving of 585,000 € / year.

The use of a mostly electric fleet will also enable an estimated reduction in CO2 emissions of about 2,350 tons during the four-year contract, demonstrating the Municipality’s commitment to combatting climate change and to drastically reducing the transport sector’s contribution to global warming.