Waste & Circularity, Water Use and Pollution

Pine Ridge Winery and Crimson Wine Group (parent company) operate vineyards and wineries on the west coast of the Untied States. The company’s goals are to become carbon neutral, to reduce utilities’ utilization and to ensure that its land is farmed sustainably.

In the sanitation process of cleaning wine tanks the average consumption of water is 180 gallons (30 gallons for each step; pre-wash rinse, caustic wash, water rinse, citric wash, water rinse, PAA sanitation rinse). In an effort to save water, a trial was conducted using a mister to dispense chlorine dioxide into the tank to replace the use of peroxyacetic acid (PAA). The mister uses 1 gallon of water and pressurized gas to propel a solution of Chlorine dioxide into the tank whereas the peroxyacetic acid rinse uses 30 gallons of water. If the mister is as effective as, or more effective than, the PAA this would be a savings of 29 gallons of water for every tank washed and sanitized. Our trial suggest that Chlorine Dioxide would be an appropriate alternative to PAA in regions that have water constraints.

In the last 10 years California has seen sustained droughts and repeated wild fires due to climate change. Our motivation is to improve upon the wine making practices while at the same time reducing the consumption of water.

The set up cost for the misting unit and liquid container is about $3,000. The sachet of Chlorine dioxide is $22.50, which will make 10 gallons of solution that can be used for 10 cleaning operations. A conservative guess of 270 tanks washings during the year would reduce the consumption of water by 7,975 gallons. The monetary cost of water is inexpensive, using local water rates but, the environmental cost are invaluable as California is headed into another drought year.

Six tanks were used in this trial. Two tanks each at 2,000 gallon capacity, 4,857 gallon capacity and 14,264 gallons capacity. The tanks were sprayed with wine lees two days before the start of the trial to allow for a high microbial population to form. Each tank was swabbed and plated in four spots: the floor, wall, interior of the ceiling tanks and the racking valve. The ATP swabbing of the tanks were done prior to start of sanitation, after cleaning and rinsing, and after the sanitizing (see BevTrac protocol).

The trial was run and the results were conclusive that the Chlorine dioxide mister was as effective at sanitizing as PAA and reduced the consumption of water. 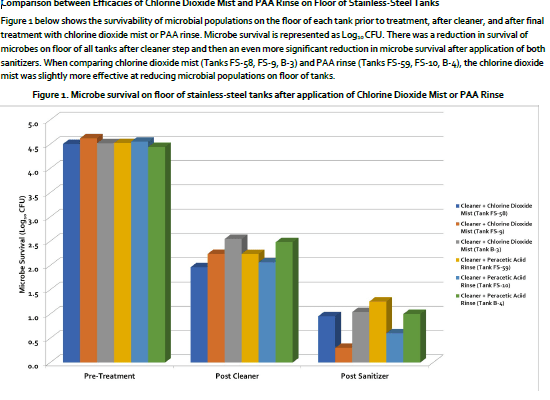 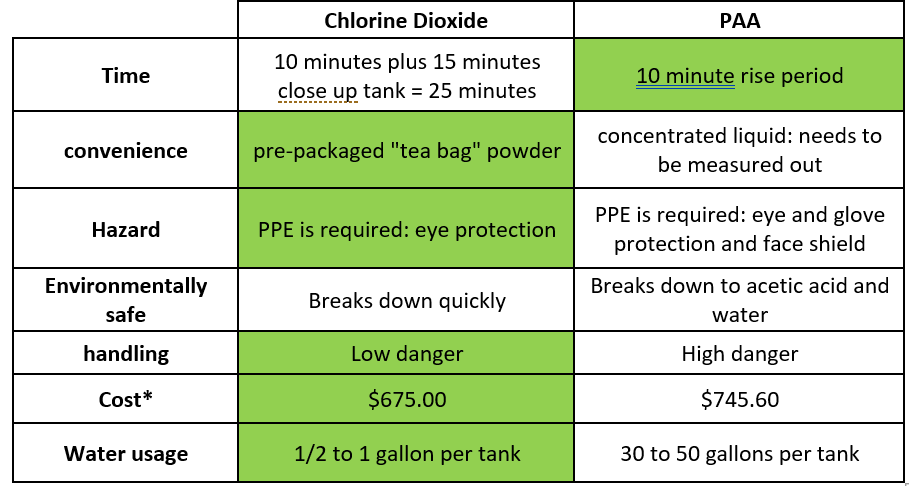 Recommend to purchase one unit and integrate the Chlorine dioxide mister into the cleaning regiment at Pine Ridge Winery. We can then assess the machine and make recommendation if improvement can be made to the set-up. We could then move to incorporate the new system to our other wineries.

Chlorine was faded out of the wine industry after it was discovered that the use of chlorine can lead to the development of TCA. But, according to the study from UC-Davis the use of chlorine dioxide does not have that same capability and is safe to use in the wine cellar. As a precaution against the development of TCA in the cellar, we will run monthly TCA atmospheric testing.