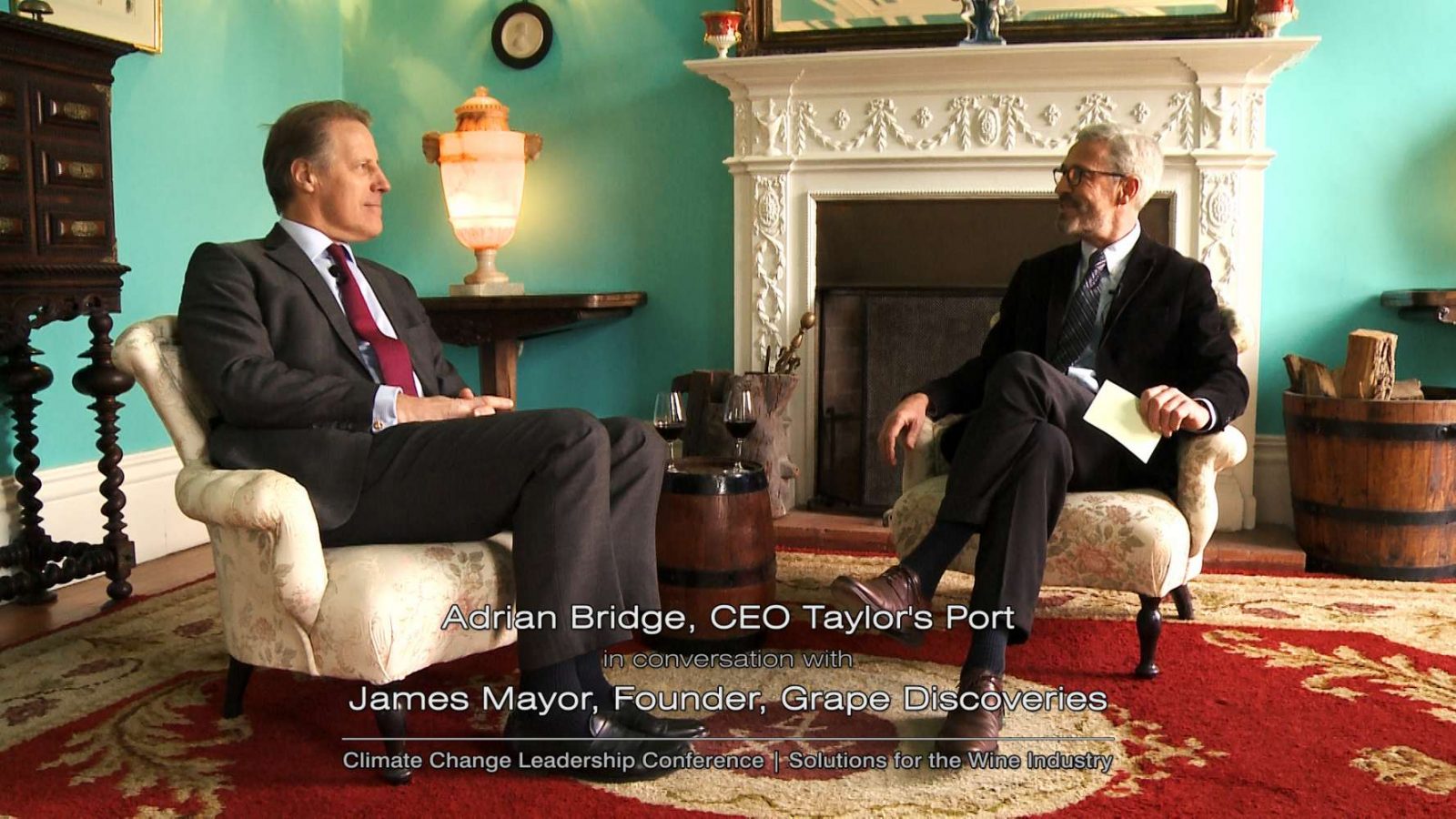 This article is original from Grape Discoveries, 22nd January, 2019 by James Mayor and mention The Porto Protocol project

The ancient city of Porto is home to an important new initiative to mitigate the effects of climate change. The Porto Protocol was launched in July 2018, at a summit with Barack Obama as keynote speaker, establishing an innovative platform for the wine industry to share environmental best practices.

In Porto, on a crisp January day, I met Adrian Bridge, CEO of Taylor’s Port and the man behind the Porto Protocol, to discuss a major follow-up event: the Climate Change Leadership Conference – Solutions for the Wine Industry, to be held in Porto from 5 to 7 March, 2019.

We have been hearing a lot recently about how countries are getting off to a late start in implementing the requirements of the 2015 Paris Agreement on Climate Change, or even in ratifying it, with negotiators bogged down in drawn out climate diplomacy. I was therefore looking forward to meeting Adrian Bridge, a man with a reputation for new thinking and getting things done.

As Bridge bounds up the steps to the room in which our conversation is going to take place, his body language sets the tone for our discussion. “We have no time to waste,” he exclaims referring of course to the combat to mitigate climate change, the existential field in which he has recently become a vigorous activist.

Bridge is just back from New York and Washington to promote the Porto Protocol. We are meeting in the Partners House at Taylor’s, the venerable Port wine house he runs as part of an extensive Port wine and luxury hotel portfolio. Everything about our surroundings proclaims permanence and tradition: fine furniture and the reassuring sound of gardeners clipping hedges. A resplendent peacock walks past the French windows and gazes in, eyeing the two glasses of vintage Port that have been placed on a table between Bridge and myself.

Climate change affects us all,” Bridge remarks, immediately dispelling this comfortable sense of security. I ask him to explain why he believes the wine industry is in a strong position to provide leadership and innovation to combat climate change. “We grow the same plant, the vine, all over the world. This is done under different climatic conditions and we can all learn from each other.” Since Bridge has been running the company, Taylor’s can already claim twenty years involvement in mitigating climate change, practicing sustainable viticulture and reducing water consumption in its vineyards and wineries.

The vine is a hardy plant and consequently a form of agriculture suited to remote regions. Wine production frequently supports the socio-economic fabric of these areas as well as making an important contribution to their cultural identity. “In the Douro, if there was no vine, there would be no economic activity,” Bridge observes.

Wine businesses are frequently family structures that span many generations and serve as memory-banks for climate information. When I talk to vineyard owners, they often tell me that they are only caretakers of the vineyard, which they will cherish and one day hand over to their successors. This long-term view not only goes against the short-term focus of our society, it opposes the imperatives of accelerating climate change.

It is Bridge’s view that the reality of climate change has now been sufficiently demonstrated and he lists a series of examples of extreme weather to prove his point, including last year’s wildfires in the Californian wine country. “Climate change is about much more than rising average temperatures. We’re looking at more and more frequent disruptions in weather patterns. These are affecting not only the wine industry, but the entire agricultural sector.” To illustrate this he cites 2018, an unusually hot year in the neighbouring Douro, the region where the grapes for Port wine are grown. “At Pinhão, at the end of May, 12% of the annual rainfall fell within the space of a single hour, some of it in the form of hail, causing massive erosion and damage to vineyards, including one of ours.” As he speaks, I think of a Douro winemaker friend who lost a staggering 70% of his annual production on the same day in May.

Punctuating his remarks with emphatic hand gestures, Bridge affirms, “we need to stop talking, and start doing. We need to stop restating the problem and talk about solutions, and we need to share these solutions. We can also learn faster from people who’ve already implemented solutions. There’s no time to reinvent the wheel.” With the force of conviction of the successful innovator and businessman, Bridge states that sharing experience and best practices will make a significant difference.

A glance at some of the case studies on the Porto Protocol website shows that an increasing number of wine industry professionals are indeed already involved in proactive measures to ensure a sustainable future for wine production. I find these examples, which engage climate change with practical resource-saving actions, forward-thinking: the Amorim cork waste management and recycling project; the Symington Grape Variety Library, a tool for determining a grape variety’s suitability to a particular location.

Distinctive as one of the world’s only branded agricultural products, wine also has a strong connection to specific geographical sites. You cannot move Château Latour, so to speak. This allows wine producers to talk directly to their consumers, in a way that would be impossible for a cereal grower. “We create an emotional connection with the consumer that can often last a lifetime,” Bridge reminds me, adding that this “sense of place” inherent in wine production becomes a “strong differentiating factor which allows the wine industry to adopt a leadership position.”

For Bridge, consumers are concerned by the carbon footprint of wine production: “if a consumer is looking at two different bottles of Chardonnay, say, one of which requires two litres of water to make, and the other ten litres, they’re going to make a choice based on this information. Consumers care.”

Recent research shows that younger generations are particularly aware of the problem of climate change and more open than their elders to reshaping lifestyle patterns to make better use of scarce resources. Bridge cites his own city-dwelling children as an example of this: “they don’t own cars. They get around using public transport or an app service. When I was in my early twenties, this would have been unthinkable!”

When I ask Bridge what advice he would give to a young wine enthusiast just embarking on their wine journey, he smiles and exclaims, “keep on exploring! There’s a wine for everyone and the great thing is, it’s a long journey of exploration.”

Not only concerned to preserve the planet on which they may be living for another fifty years or more, demographic research indicates that younger generations are also looking for experiences rather than material assets. I put it to Bridge that one of the experiences they are seeking is off-the-beaten-path wine tourism, and that when I lead a private group to the Douro, participants develop a closer connection with the region’s wines through experiencing the terroir and meeting local people. “Tourism is here to stay,” Bridge reflects, adding that tourism needs nevertheless to be more sensitive to the carbon footprint.

Adamant that there can be no magic solution to the challenges of climate change, Bridge echoes Barack Obama’s remarks at the Porto Protocol Summit, pointing out that we should not expect governments to do everything for us. The solutions will be multiple and come about through business and personal initiatives. For Bridge, “businesses are beginning to realize that doing the right thing for the climate does not always involve an additional cost. On the contrary, it can frequently lead to savings and increased profitability.”

Through providing a platform for sharing solutions, the Porto Protocol aims to encourage not only members of the wine industry, but equally other industries, to help individuals make the difference in mitigating climate change. Adrian Bridge expresses this as two straightforward objectives: first, do more tomorrow than today. Then, share experiences. The Porto Protocol’s strength lies in this practical approach. The principal idea is we can all do something to mitigate climate change, now.

The Climate Change Leadership Conference – Solutions for the Wine Industry, will provide an opportunity for industry members to do just that: share experiences. A diverse list of speakers is attending the Conference. Attendees will be able to hear, in addition to keynote speaker former US Vice President Al Gore, founder of the Climate Reality Project, interventions from wine scientists such as Jose Vouillamoz, wine producers such as Miguel Torres, or wine writers including Jamie Goode.

James Mayor is a writer and the Founder of Grape Discoveries: https://www.grapediscoveries.com/

Grape Discoveries is a Founding Member of the Porto Protocol.
The Climate Change Leadership Conference will be held in Porto, from 5 to 7 March, 2019: https://climatechange-porto.com