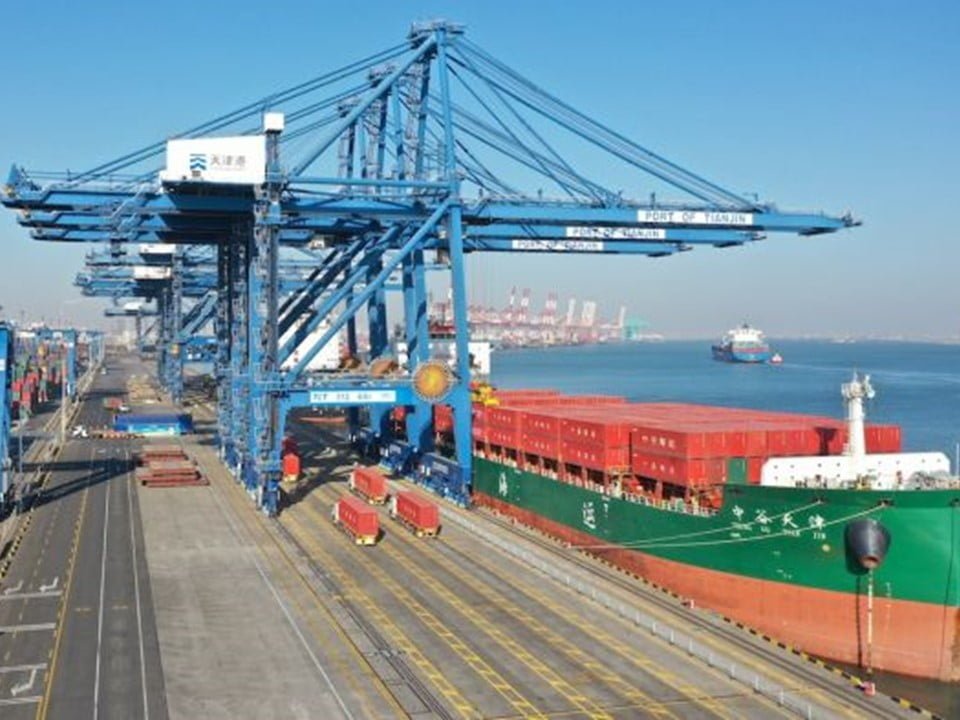 Shipping air across the Pacific

Following our Climate Talk “Climate in a Bottle” , we recommend an article from Jancis Robinson (a version of an article is published by the Financial Times.)

Aware of glass bottles’ heavy carbon footprint, Rosemary Cakebread has been researching options for lighter bottles for her exceptional Gallica wines from her base in the Napa Valley. She emailed me with her dismayed reaction to what her exhaustive researches have revealed. ‘What I’ve learned is that more and more wine glass available on the West Coast is in fact made in China.’

US imports of glass containers from China increased by 55% to 2.1 billion in the five years to 2018 according to US trade data; industry estimates that year were that 70% of the bottles filled by American wine bottlers were sourced from China, and that proportion is likely to have grown since. America’s domestic glass bottle industry has been shrinking too: between 2005 and 2011 a total of 11 US glass container manufacturing plants closed, leaving 43. The Observatory of Economic Complexity (OEC) estimated that in 2019 the US trade deficit between imports and exports of glass containers was $1.22 billion. (All of this makes me wonder where the Trump Winery in Virginia sources its bottles…)

Standard 75-cl glass wine bottles vary in weight between under 400 grams and more than a kilo. The heavier they are, the greater the carbon emissions from making and transporting them, which together account for by far the greatest proportion of wine’s carbon footprint.

Increasingly aware of this, we started noting bottle weights in our tasting notes in February in order to highlight producers who use particularly heavy or particularly light glass. On the basis of this, I would say that the average bottle used for wine is around 550 grams although it varies by country, with producers in the US and Argentina favouring some of the heaviest. In a recent collection of tasting notes on Eastern European wines I found one used by the Georgian producer Dugladze weighed as much as 1,025 grams whereas most bottles used by the Romanian producer Cramele Recaş were only 345 grams. Recaş co-owner Philip Cox points out that these lighter bottles – the fatter burgundy shape is apparently easier to lightweight than the straight-sided bordeaux shape – cut transport costs by about 10%.

Although many of her winemaking peers in Napa Valley seem happy to use bottles weighing 800 grams or more, Rosemary Cakebread is clearly serious about switching to much lighter bottles, but she refuses to source them in China. ‘To my mind’, she wrote in her email, ‘it’s not sustainable to buy a 400-gram bottle and then ship it nearly 7,000 miles.’

Despite the impact on the planet’s atmosphere, shipments of empty bottles around the globe are growing. British thirst has resulted in a shortage of glass bottles in the UK. Every month 200 containers of glass bottles arrive in the UK from the Al Tajir bottle factory on the outskirts of Dubai, for instance, albeit mainly for beer in this case. Croxsons, a glass-bottle supplier based in south London that has been run by the Croxson family since 1872, acquired a furnace in China in 2018 to supply customers in the US, Australia and New Zealand. A 2015 survey conducted by consultants EY for FEVE, the association of European glass manufacturers, put the proportion of their glass bottles that travel more than 300 km (186 miles) from furnace to filling line at 44%. China may be by far the world’s biggest exporter of glass bottles, but Germany is the second biggest.

Some countries just don’t have domestic glass production facilities or offer very little choice. New Zealand, for instance, has a single producer whose bottles Master of Wine Steve Smith, of Smith & Sheth, has found so inconsistent that he imports bottles from Saverglass. According to him, Saverglass, based in France, ‘seem well ahead of the pack on sustainability and their glass quality is first class’.

In line with increased awareness of sustainability there has been a general and laudable trend to reduce bottle weights. Statista in 2019 noted an overall trend that the average weight of bottles had fallen by 30% over the previous decade. Accolade, the biggest bottler of wine in the UK, have decreased their proportion of bottles that weigh over 500 grams from 17% in 2017 to 3% in 2020. Over the same period the proportion of their bottles that weigh less than 390 grams has grown from 24% to 42%. But there are still producers devoted to heavier bottles, or who believe their customers are. 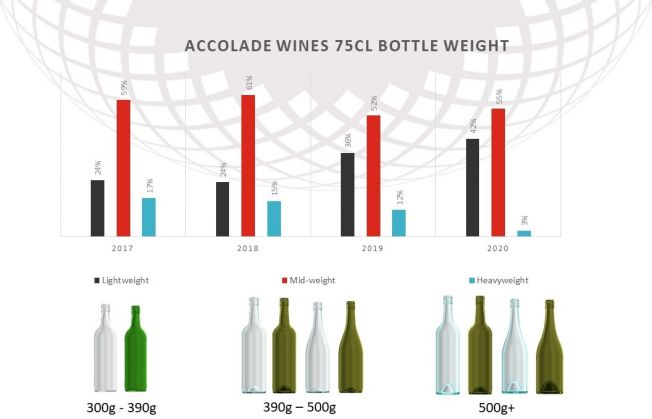 Part of the motivation for Croxsons’ investment in China was to supply heavier bottles. On their website they report ‘concerns amongst some of Croxsons’ customers that the industry has moved some bottles away from being super-premium, or even premium, to a lighter, standard weight bottle. Clearly the risk to brands using a wrong-weight bottle is that consumers will feel a disconnection between the price point and the aesthetics that the bottle delivers.’

For many there still seems to be a perceived correlation between bottle weight and wine quality.

Sebastian Zuccardi is one of Argentina’s most respected young winemakers and his company is the country’s leading organic producer, but he still uses some seriously heavy, 900-gram, bottles for his Finca Piedra and José Zuccardi bottlings – although he points out that they used to be even heavier. ‘It’s really to do with consumers, because in some markets, size and weight of the bottle continue to be important.’

The substantial Languedoc producer Gérard Bertrand is another advocate of organic vine-growing but persists with heavy bottles for his top cuvées. His justification is a common one. He argues that they represent only a small proportion of his total production and that he is anyway doing his bit for the planet in the vineyard and by using lighter bottles for the rest of his range. The only problem is that producers like him, by putting their more expensive wines in heavier bottles, encourage the consumer perception that good wine comes in heavy bottles.

In fact the world’s most expensive wines tend to be packaged really quite modestly. Bordeaux first growths, for instance, come in bottles that weigh not much more than 500 grams.

Chakana is one of Argentina’s biggest biodynamic wine producers. Winemaker Gabriel Bloise reports that when Chakana changed to lighter bottles 10 years ago European markets welcomed the change but ‘in the USA we did meet resistance to lighter bottles and our importer says they have had a negative impact on sales. Our organic importer in the USA prefers the lighter bottles of course. Asian markets insist on heavy bottles. But the only impact of heavy bottles is visual and they do not improve wine taste. We decided to spend the money [saved by choosing lighter bottles] on wine improvements (organics, biodynamics) rather than packaging so we were able to improve quality, reduce the glass and keep our prices stable.’

Angelos Iatridis of Greece’s excellent Alpha Estate also goes more than the extra mile along the path to sustainability and justifies the difficult-to-copy 887-gram bottle for his top Xinomavro as an anti-counterfeit measure. He is another fan of Saverglass.

Rosemary Cakebread ended her email with the hopeful observation that in the US, ‘supply chain issues are forcing local glass plants to dust off their old equipment. The more wineries request locally made lightweight bottles, suppliers will take notice and there will be more options’.

Glass, being inert, is the perfect material for fine wine designed for ageing. Because of their heavy carbon footprint, glass bottles should ideally be recycled but few countries can claim to recycle a sufficient proportion of them. The US Environmental Protection Agency, for instance, calculates that about 55% of all wine bottles in the US end up in landfill each year.

The Gotham Project throughout the US, for example.

Borough Wines in London are the UK pioneers.

Frugalpac of Ipswich, UK, are making headway with their containers that are shaped like a glass bottle but weigh a fraction of one.

Flat bottles made of recycled plastic

Designed by UK-based Garçon Wines for wines consumed soon after purchase (Sonoma State University calculated that 90% of all wine is drunk within two weeks).

Proliferating at pace, especially in the US, and highly convenient.