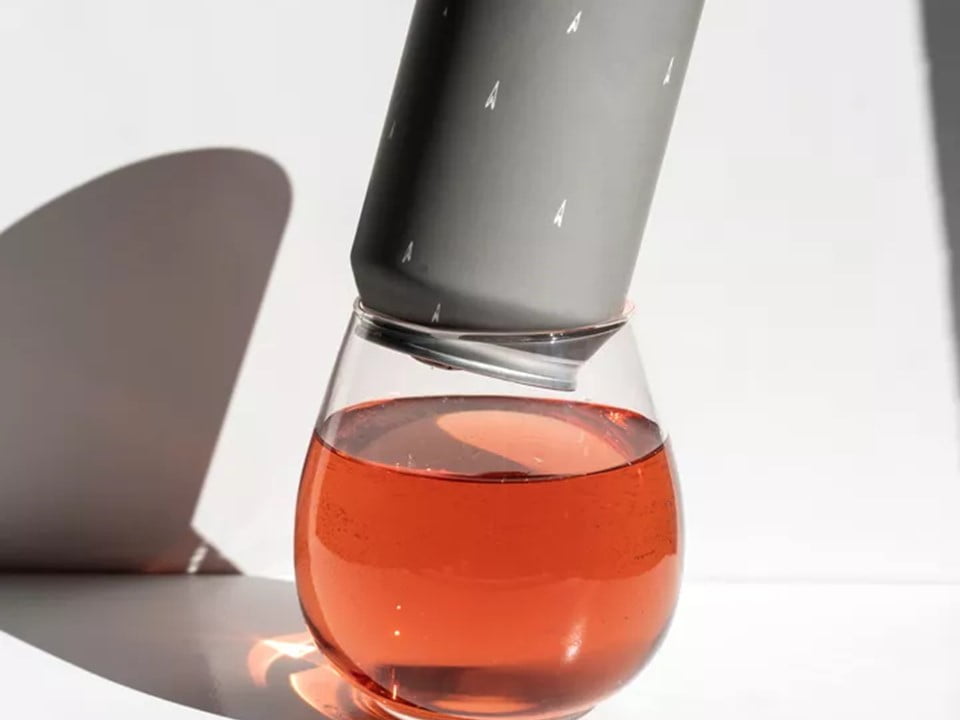 It’s just as important as the juice

You may assume you’re making a responsible, even laudable choice by sipping a glass of locally produced organic and biodynamic wine. And you may be. But so much more goes into a wine’s carbon footprint than simply how and where it was produced.

A wine’s carbon footprint, as it turns out, has much less to do with vineyard practices—although those are indeed important for the quality of the wine and the health of its workers and surrounding community—than it does with how it’s packaged.

Even if a wine is produced close to your home, the bottle in which it’s packaged might have been shipped from China. Or as Rachel Rose, the winemaker and vineyard manager at LIVE-certified Bryn Mawr Vineyards in Eola-Amity Hills in Oregon’s Willamette Valley, recently discovered with horror, one small element of the wine bottle may be molded in Canada, sent to Europe to be embossed and then sent back to the U.S. for final production.
“During the pandemic, there were incredible delays all along the supply chain, and it made me really focus on where every element of the bottle was coming from,” says Rose. “We had a hard time getting tin capsules, and I started thinking about what those caps are made from and where they’re mined. I figured it was a third-world country. While investigating that, I found out that ours were molded in Canada, sent to France for embossing, then shipped back to us. I started to imagine the carbon footprint we were creating by air-freighting capsules.” Rose decided to eliminate the capsules entirely and replace them with a more eco-friendly, domestically produced blended wax seal.
Supply-chain challenges during the pandemic caused Rose and many other members of the wine industry to rethink how they were doing business. In the process, several found new ways to lighten their environmental loads. Many had already been put on notice by the climate crisis and had taken measures to reroute their supply chain. And for many, unexpected opportunities emerged from the crisis.

In 2012, Rose switched to eco-glass for half of Bryn Mawr’s 6,500-case run of wines—a decision that allows the winery to ship 56 cases per truckload as opposed to the 42 cases that fit using ultra-premium bottles. “I started thinking about how that would reduce the number of delivery trips, which would ultimately reduce the wear and tear on the roads, and the tires, which would need to be replaced less and less often,” says Rose. “It sounds crazy, and it’s unquantifiable, but once you let your imagination go, you realize that even chipping away at some of these issues can make a big difference.”

Rose has also shifted from using a factory in France for her bottles to using an Energy Star-certified domestic producer in nearby Seattle, Ardagh Group.
Other producers are just as invested in the production process as they are in their farming choices. Veuve du Vernay, an organic sparkling house owned by the house of Patriarche in Beaune, France, sees itself as entirely vine-to-glass, says Patriarche COO Carlos Varela. The company’s commitment starts with the choices it makes in the vineyard and extends far beyond.
“Our bottles are produced locally in Beziers, and we worked with the manufacturers to develop a special bottle unique to our range that helps us optimize shipping and transportation, as well as the functionality and capacity of the production plant,” says Varela, adding that everything from water use to energy is optimized at the plant to make every step of the packaging process as sustainable as possible.

Bottle-makers themselves, such as Saverglass, of Oise, France, are getting into the business of sustainability. In addition to expanding its presence at three production and decoration sites in France, in 2013 Saverglass opened a factory in the United Arab Emirates to have easier access to South Africa, Australia and New Zealand, and in 2018 the company opened another in Jalisco, Mexico, to be closer to its North, Central and South American markets.

Their facilities have also become increasingly green, with emissions reduced through energy initiatives by up to 90%, says Varela. And the company aims to be 100% carbon-neutral by 2050.

In addition to the weight of their packaging, wineries are also examining the packing material they use to pad their precious cargo. Vernay uses locally produced recycled cardboard to ship wine to distributors and customers.

Frey Vineyards, one of the O.G. organic and biodynamic wine houses in Mendocino County, which has grown from making 2,000 cases a year in 1980 to 220,000 cases a year currently, has always been passionate about the environment. Its founder, Katrina Frey, an early proponent of lighter bottles, says she was shocked when she started looking at the environmental impact of virgin versus recycled cardboard, and she commissioned Frey’s operations manager, Nicole Paisley Martensen, to study the issue in-depth.

“We were using white cardboard boxes to ship wine to distributors, but when we found that every ton of virgin cardboard uses 24 trees, 33% more energy and 49% more wastewater and releases 37% more greenhouse gases, the choice was simple,” says Frey. “We are so careful in the vineyard; we wanted to extend that to every step of the process.”

Biodynamic farming, says Frey, is based on the idea of “the farm or vineyard being a closed loop. If it’s in balance, you don’t have to bring in any chemicals or inputs from outside. We decided to just extend that loop a bit for the production process, and now we source as much as we can locally, and also use recycled, uncoated paper with vegetable-based inks for our brochures, compostable pulp liners for shipping DTC, and domestically produced Forest Stewardship Council-certified and chlorine-free labels for our wine bottles.”

What about a wine bottle’s seals? William Allen, the winemaker at natural small-lot Two Shepherds in Windsor, California, opted from the get-go to avoid foil closures. “Everyone thought I was crazy; they thought the bottle looked naked,” he says. “But now more and more producers are coming around to that.”

Like Rose, Allen realized that in addition to the convoluted global chain of sourcing required for the classic closure and the enormous carbon footprint such a miniscule accessory generated, the foil itself was not recyclable in most municipalities—and more to the point, “completely pointless.”

That type of iconoclastic thinking led Campovida in Hopland, California, to turn to Diam Corks. Cork-oak forests capture climate-warning carbon through photosynthesis, making, counterintuitively, corks a net-benefit for the planet. Diam, in addition to maintaining vast oak forests in Europe, has also implemented a strict environmental policy that has resulted in a negative carbon footprint for its closures. Recently, Diam perfected a sustainable agent derived from plants to guarantee that its corks are free of the dreaded cork taint.

“Cork taint is a serious issue,” says Matt Hughes, Campovida’s winemaker. “There’s nothing more unsustainable, even if vineyards are organically farmed, than seeing a bottle of wine get dumped because of cork taint. It’s not just wasteful; it’s lost labor and probably a lost customer.”

Facts and figures on cork taint are hard to come by, but Diam’s approach of essentially cleaning micro pieces of cork to remove the taint caused by the chemical compound trichloroanisole, and then melding them back together into a classic cork shape, guarantees that a bottle of wine sealed with its cork will be free of TCA’s notorious moldy-newspaper notes.

Campovida also kegs its wine for local bars and restaurants who want to put it on tap and has moved into the world of canned wine with Maker Wine.

“I was nervous about canning our wine, but after testing it, I realized how good it could be,” says Hughes. “Now I keep cans of our Maker viognier in the fridge at home. Initially, we just did the can equivalent of 230 cases of wine with them, and we’d like to work with them even more.”

Like Hughes, Allen was hesitant at first to put his wines in cans but attributes his changed mind to his partner, Karen, who’s the head of consumer research for top-selling winery Kendall-Jackson. “She knew that not only was it a growing market, but our low-intervention, low- to no-sulphur wines wouldn’t react with the lining on the can and would perform well,” says Allen.

Karen was right, admits Allen. After he did a small 250-case release of a cinsault last year, he’s ramping up production and planning three or four different canned releases at 275 cases each.

Chris Brockway, the winemaker and owner of Berkeley’s Broc Cellars, started with bottles and is slowly expanding the company’s line of cans, seeing them as a more relatable and responsible vessel option that fits into his brand’s ecocentric philosophy.

“From our vineyards to our production facility and our cans and bottles, we try to make everything as natural and environmentally responsible as possible,” says Brockway, explaining that Broc uses organically grown fruit, low to no sulphur and no commercial yeasts or additives, plus recycled cardboard. “I also think that one thing missing from the conversation about sustainability is responsible consumption,” he says. “I’d much rather have people split a can with their pandemic partner than drink an entire bottle of wine.”

Sarah Hoffman, the co-founder of Maker Wines, was inspired to create a line of premium canned wine with partners like Campovida and others for two reasons: generational and environmental. “Cans are easier and more transportable, and they appeal to younger drinkers,” she says. “Aluminum is also 100% recyclable and one of the most recycled materials on the planet.”

She’s correct. In the U.S., aluminum cans get recycled 55% of the time, versus glass’ rate of about 34%. According to the Aluminum Association, cans are also typically composed of about 70% recycled content. Cans’ ever-increasing market share is projected to reach $155.1 million by 2027.

Cans are also much lighter and more space-efficient than bottles, says Kenny Rochford, who co-founded West + Wilder with the goal of making fine wine more accessible to all while also producing an environmentally responsible product. “There’s a huge difference in terms of efficiency,” he says. “The same volume of wine in a can takes up half of the weight and space. I can fit 56 cases of light glass bottles on a truck, versus 90 equivalent cases of canned wine. Think of the difference in the carbon footprint.”

By slashing its transportation footprint in half, the company is making a very real impact. West + Wilder was founded in 2018 with 500 cases of rosé and 500 of white, and now it’s cranking out 45,000 cases per year, with targeted growth of 65,000 as new markets in Australia open up.

These producers, and many others, are using every tool at their disposal to make your glass of wine more eco-friendly. As they can attest, every choice, no matter how minor, can have an outsize impact. Now it’s consumers’ turn to walk the walk by thinking more deeply about the producers we support and, by extension, the choices they make.

Close to Home: For wineries, a carbon tax is pro-business

Sustainable Use of Water in Winegrape Vineyards – OIV