Spier – Storing carbon in the soil and Water conservation

Spier, near Stellenbosch, is one of South Africa’s oldest wine farms with a recorded history dating back to 1692. The 621ha family-owned estate is holistically farmed to create a diversified, balanced ecosystem with minimal impact on the environment.

A primary focus is the regeneration of soil fertility, which is achieved through methods such as high-density grazing and nutrient-rich organic compost. 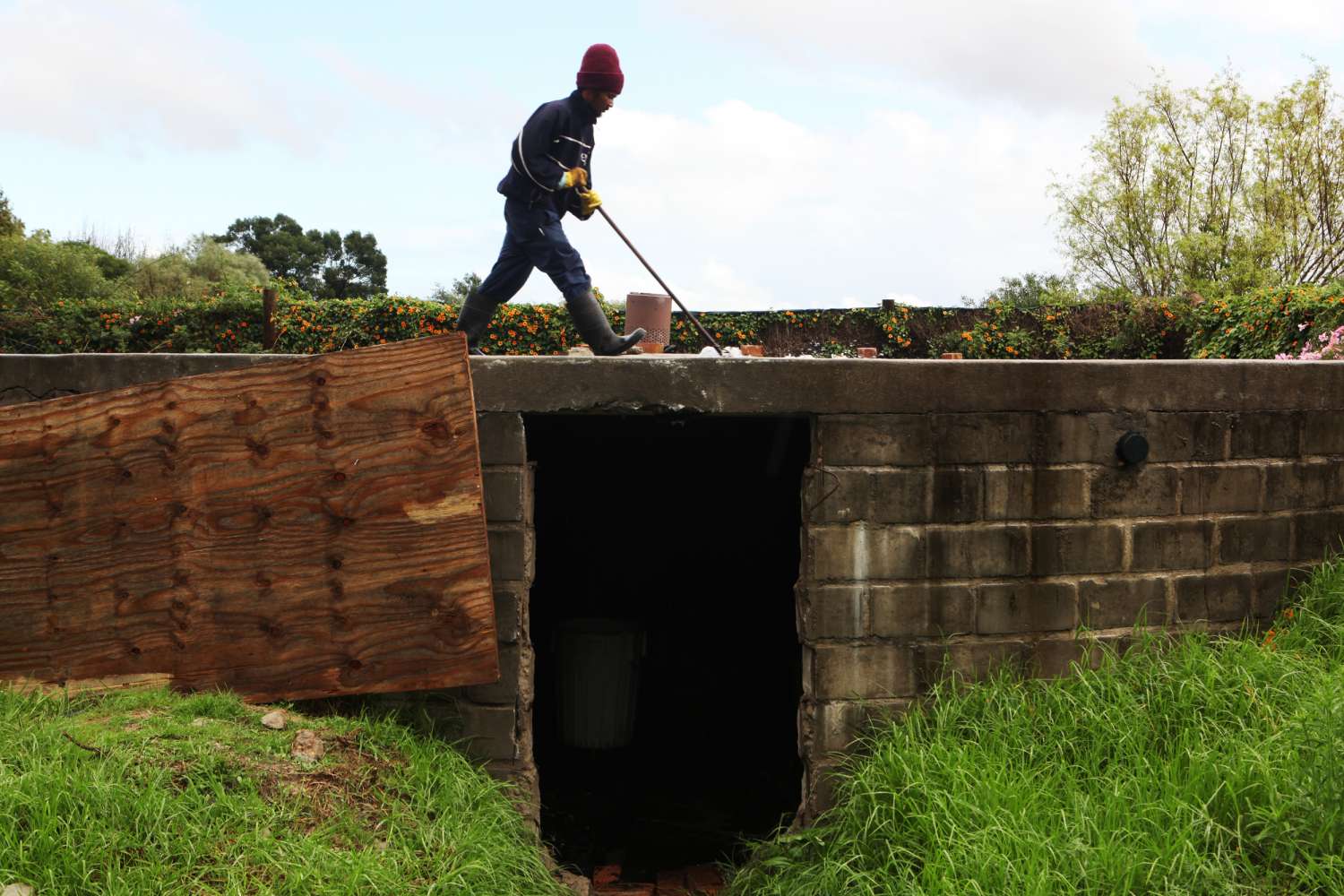 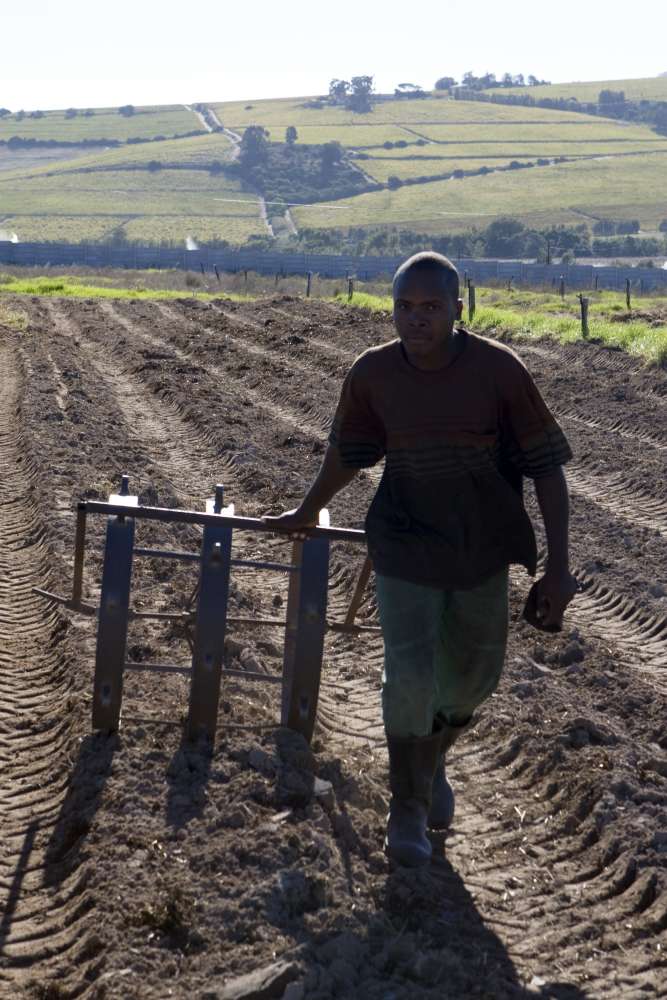 Organic vineyards thrive in relationship with pasture-reared cattle, pigs and chickens. Aiming to be as natural as possible, harmful chemical fertilisers or pesticides are avoided.

The ethically produced meat and vegetables from Spier’s pastures and gardens are used in the farm’s restaurants and hotel. This enhances self-sufficiency, boosts the region’s food security and reduces carbon emissions as the food does not require extensive transportation and external inputs.

Extensive tracts of thirsty alien vegetation have been removed, and more than a million indigenous plants replanted. 100% of Spier’s black- and grey-water and more than 98% of solid waste is recycled.

Spier is an ethically-, environmentally- and socially-conscious farm in South Africa’s Stellenbosch Winelands. With a recorded history of more than 300 years, today it’s a family-run destination that offers good food, wine, hospitality, arts and farming. Employing almost 500 staff, the farm consists of a 153-room hotel, a conference centre, restaurants, winery and farming operation.

Spanning 621 hectares, the farm has been family-owned since 1993. Historic buildings and adjacent land have been restored, conserved and rehabilitated: a demonstration of a commitment to honour the farm’s heritage and nurture its environmental biodiversity while being mindful of the region’s socio-economic development challenges.

Spier has been recognised by a number of external organisations for its commitment to sustainability and ethical business. The farm is organically certified and was awarded Conservation Champion status by WWF-SA. Its Hotel was one of the first in South Africa to receive Fair Trade in Tourism (FTTSA) accreditation; it also won gold at the African Responsible Tourism Awards 2016 in the category of Best for Accommodation for Responsible Employment. A member of the Wine Industry Ethical Trade Association (WIETA), Spier’s winery is FSSC 22000 certified, Control Union Vegan accredited and follows the Integrated Production of Wine (IPW) criteria.

Spier’s winery sources grapes from its home farm, the organically certified Nooitgedacht near Paarl which it also owns, and a number of growers elsewhere in the Western Cape province of South Africa. 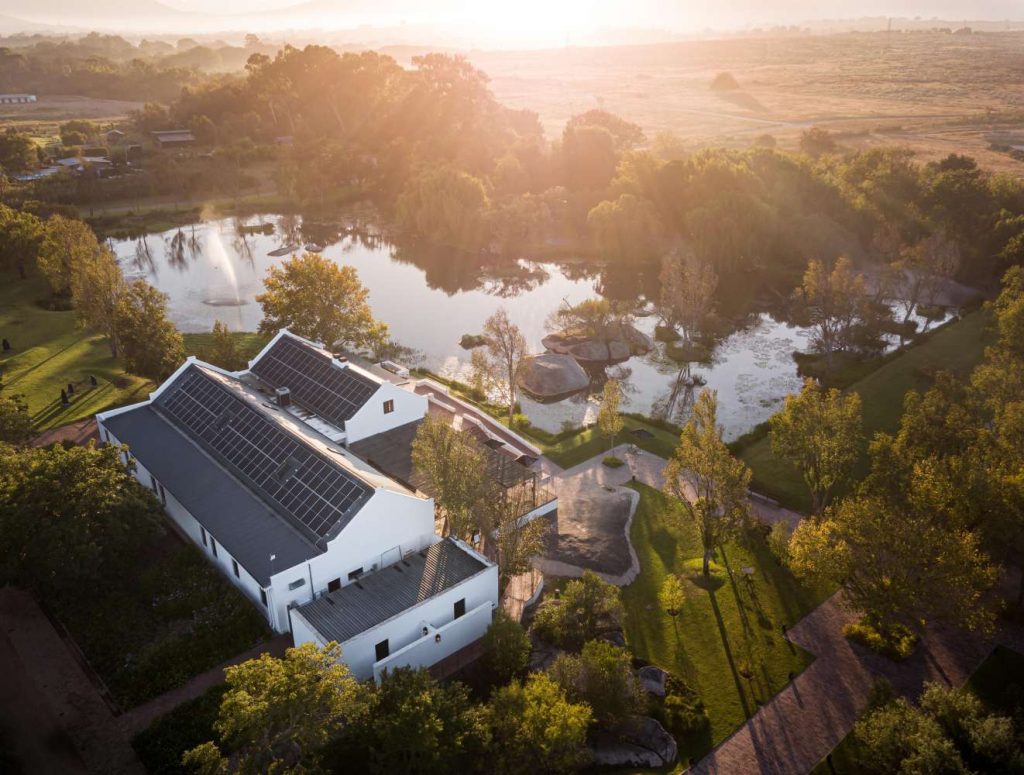 By 2007, decades of aggressive conventional monoculture at Spier had resulted in very poor, infertile soils. The farm also contained a lot of alien vegetation which was consuming water at higher rates than indigenous species. At the same time, climate change was leading to higher temperatures and decreases in rainfall.

Carbon is the scaffolding on which all of life is built. Minerals housed in the carbon’s superstructure are broken down by soil microbes and these “digested” minerals help plants to grow. Higher levels of carbon also help the soil to retain water. A 2% increase in organic matter (carbon) in the soil doubles the water holding capacity of the soil.

In its 132 ha of irrigated pastures, Spier uses a method called high-density grazing (pioneered by Andre Voisin and perfected by Alan Savory and Ian Mitchell-Innes) to “super-charge” the growing process of their pastures and enrich their soils. 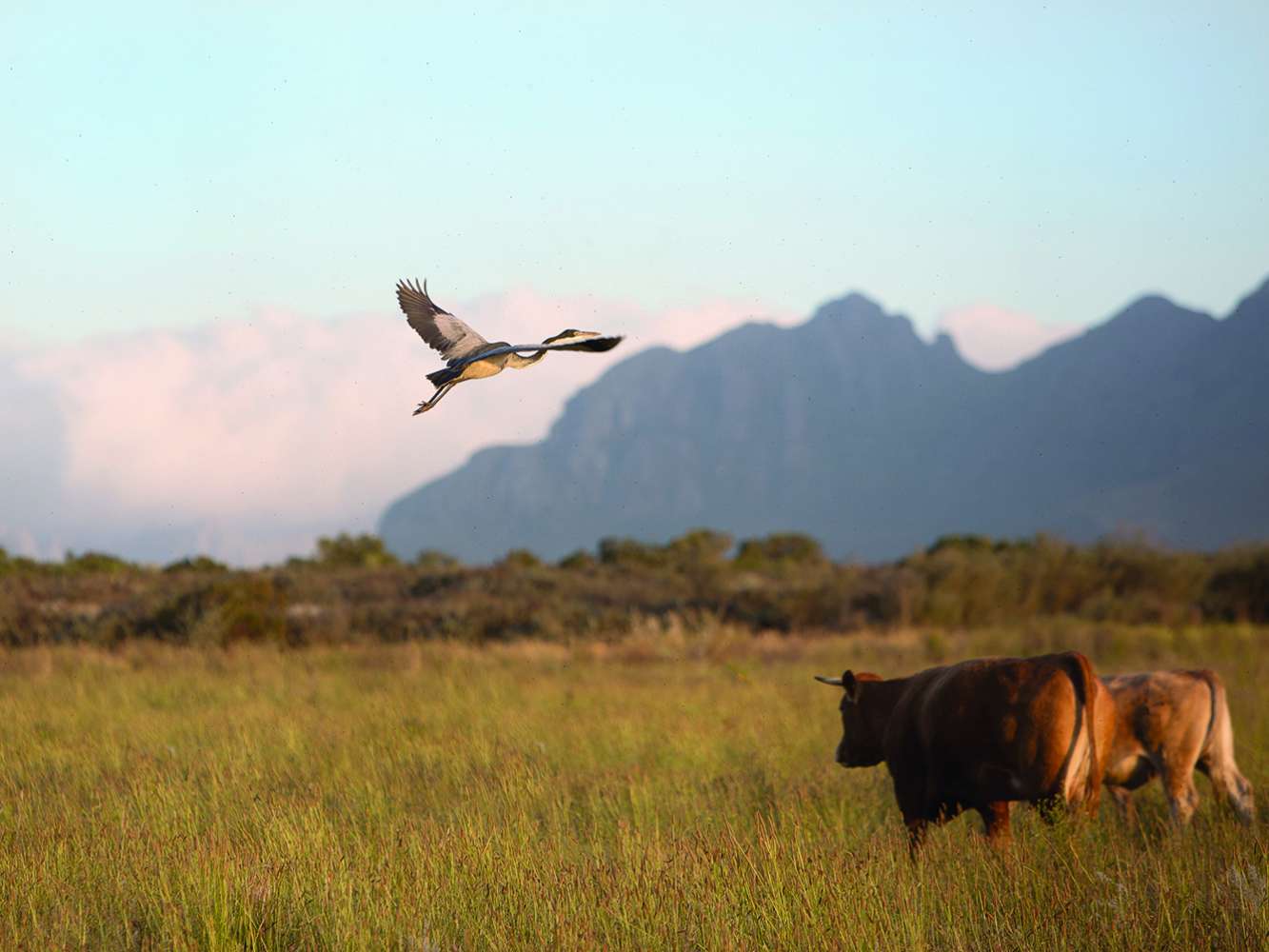 Cattle are moved four times daily, while the egg-laying chickens and their “Eggmobiles” (mobile housing which they spend the night in) are moved daily. Pigs are moved every three days. 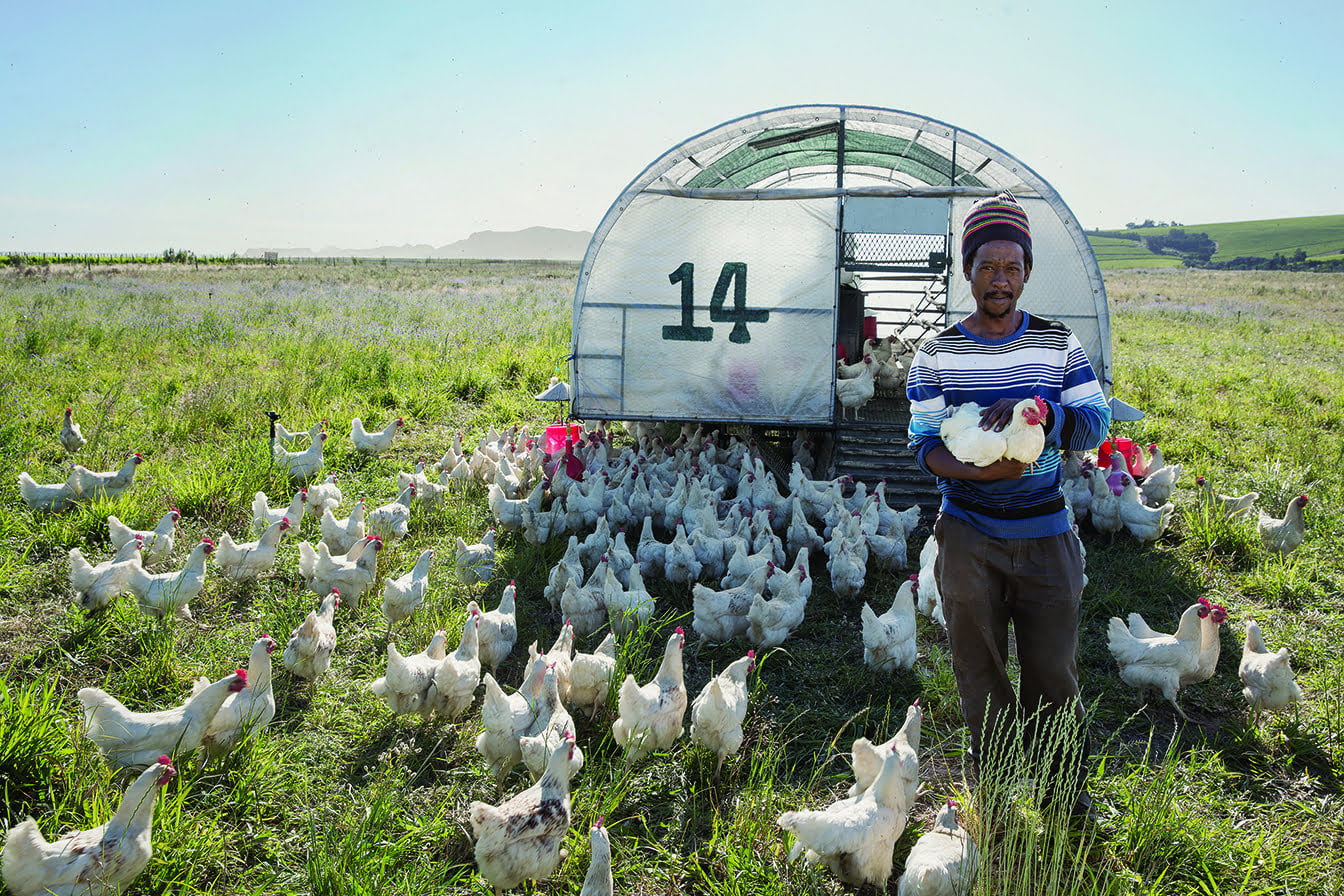 This results in faster carbon sequestration. High-density grazing results in carbon being sequestered faster because it helps to grow the plants to grow faster. It does this through the following ways:

There are 18 perennial plants (grasses and legumes) growing in the pastures. Each provides a variety of nutritional benefits for the animals, while the legumes assist with nitrogen-fixing.

Garden prunings and cut-out alien vegetation gets chipped and combined with pomace from our winery to form a nutrient-rich compost. This is used for mulching in our vineyards, gardens and nursery. The compost is also sometimes combined with the vermicompost produced by our worm farm; this is sprayed on the vineyards. Use of organic waste to form compost results not just in less waste-to-landfill, but ensures natural boosting of soil fertility.

As with its pastures, the 22ha vineyards on Spier’s farm do not receive any pesticides or artificial fertiliser. Chicken feather mulch is placed around the base of the vines to minimise weeds, conserve water and boost soil nutrients. Nutrients are also boosted from the dung of cattle who are sometimes permitted to graze here during winter. 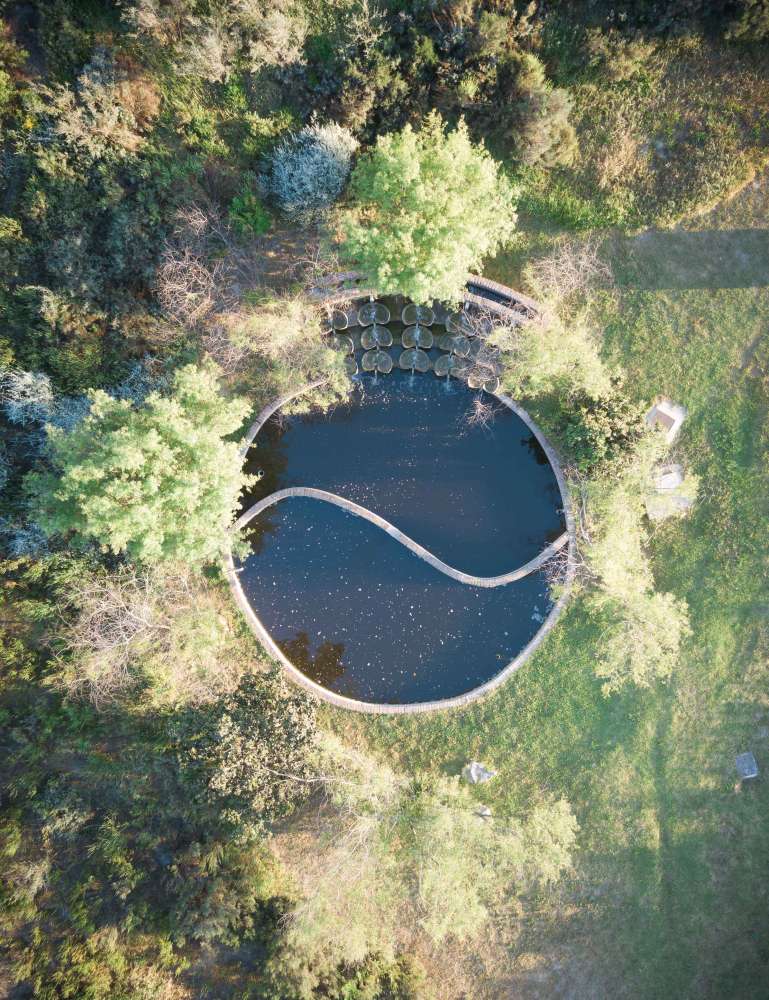 Spier’s Nursery manager Wilton Sikhosana and his team of 30 have planted more than one million bulbs, 87000 trees and shrubs and 6000 succulents across our 620ha farm. The replanting has attracted a wealth of bird and animal life back into the area and forms part of efforts to ensure Spier’s biodiversity is both protected and enhanced. 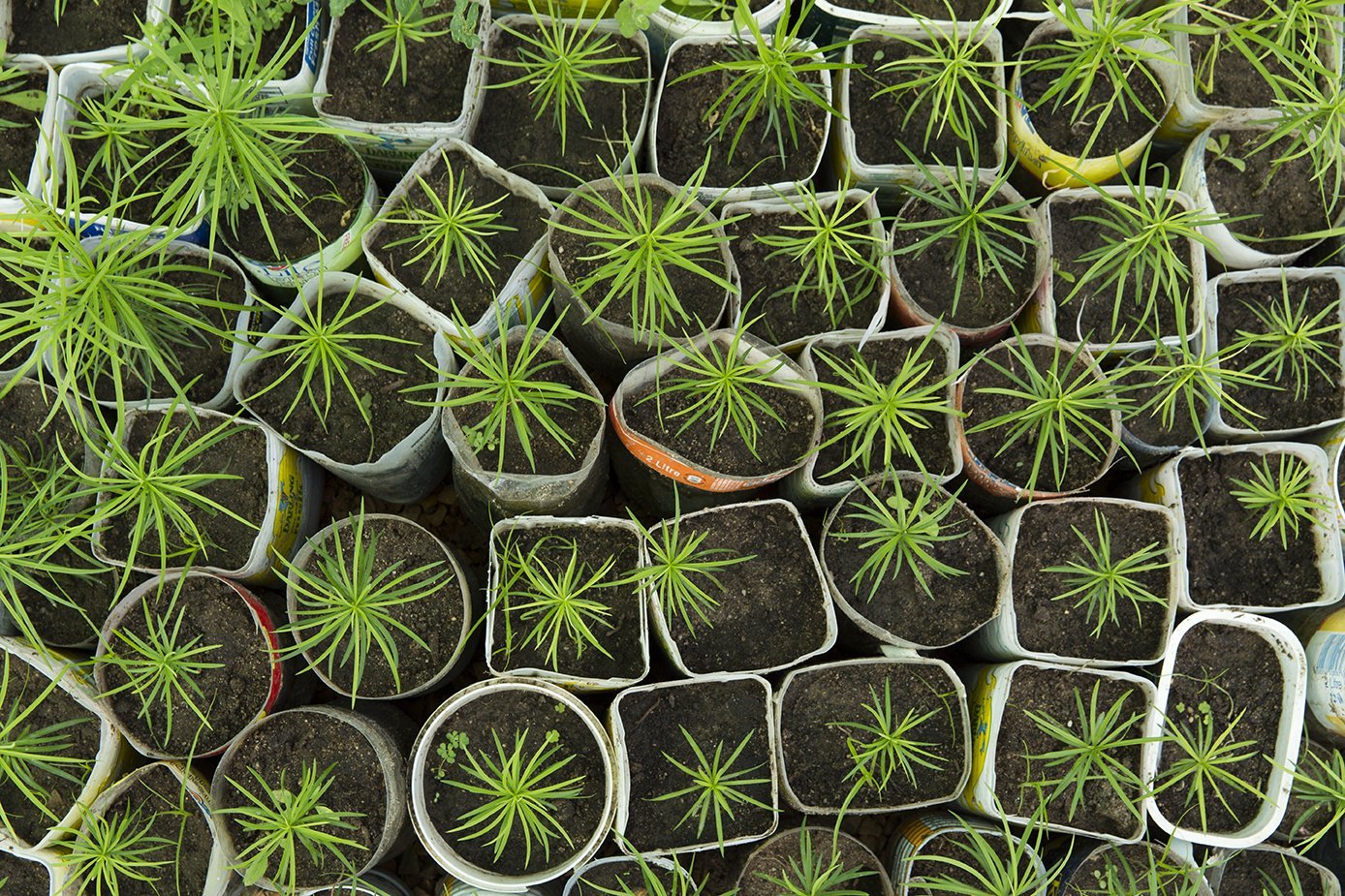 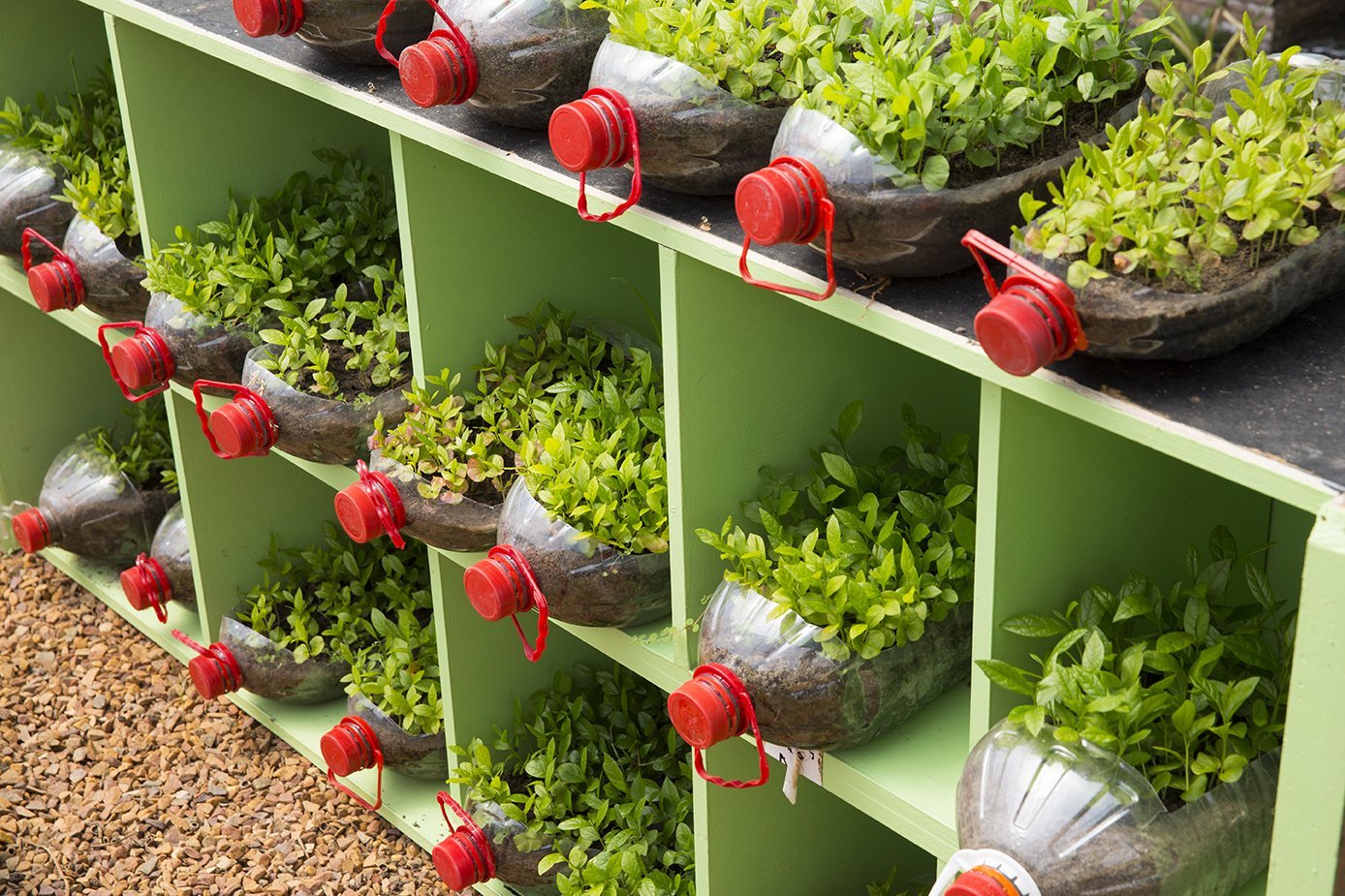 Wilton studies the ecology, distribution and habitat of each plant species that he propagates, so he knows which plants should grow where. Spier farm has a variety of different habitats – including its river network and wetlands where bulbs have been planted. On sandy, drier patches a variety of fynbos species and trees are planted. 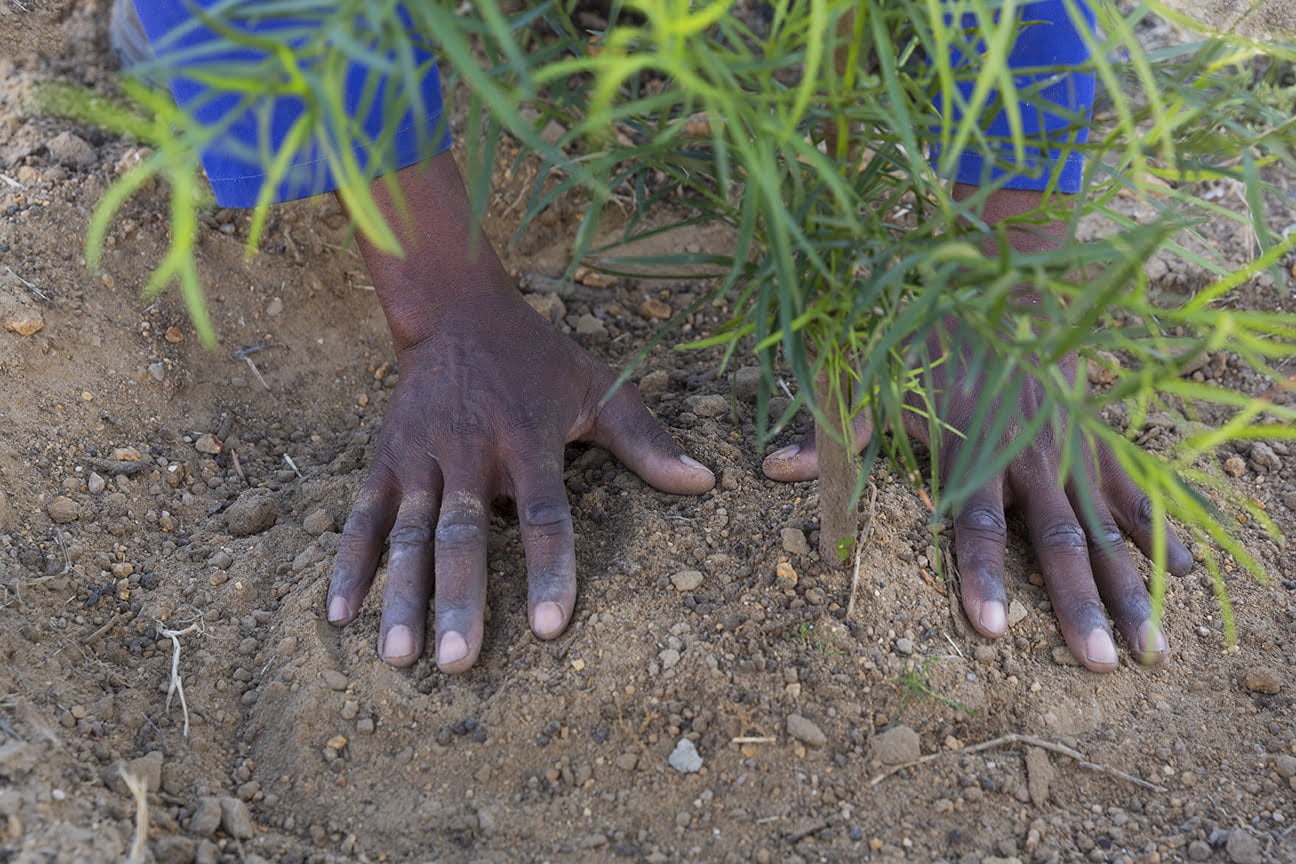 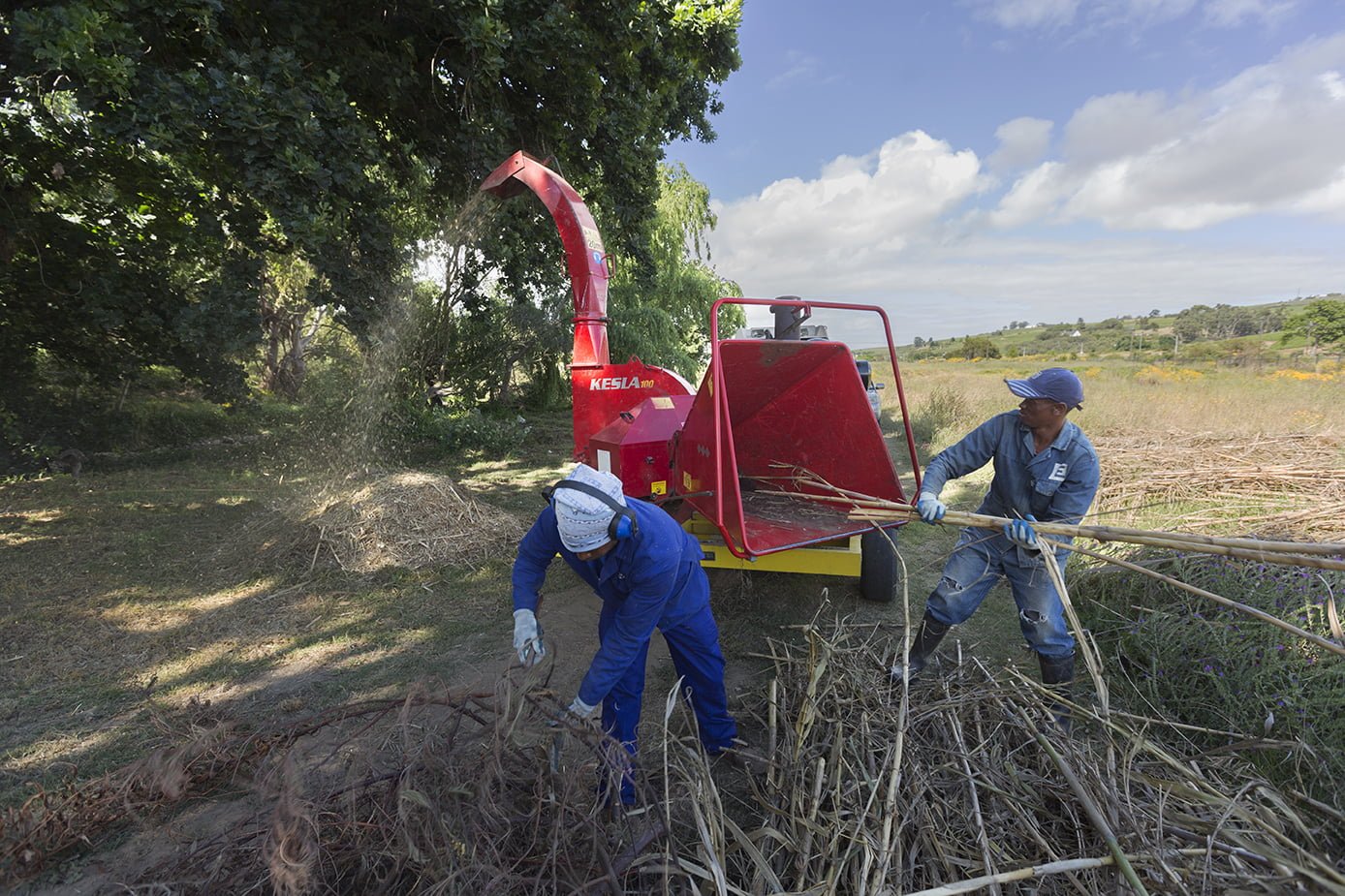 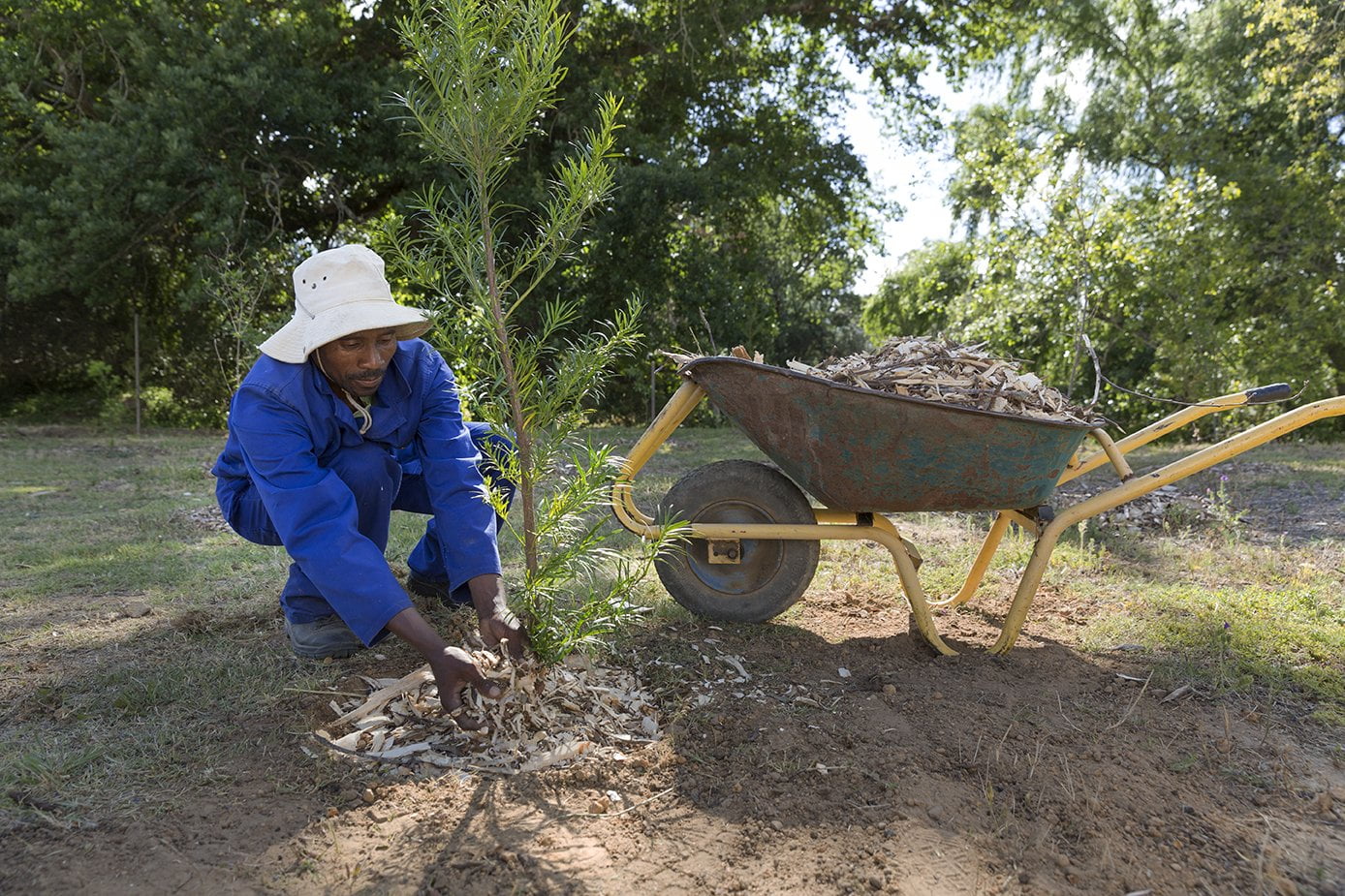 There are many areas across Spier where thirsty alien vegetation has been cleared and water-wise indigenous species can be planted in their place. Specially demarcated zones for replanting – “nature strips” – create diversity surrounding the vineyards and pastures. Combined with the pre-existing patches of endangered Renosterveld (which has Spier committed to conserving), these protected zones will ultimately form one continuous conservation corridor across the farm. This increases the viability of fauna and flora populations by enabling them (or their genes) to flow from one area to another. The larger and more diverse a population, the better that species is able to adapt to environmental stresses over time. This will minimise the potential localised extinction of species and ensure that the maximum biological diversity is conserved at the site.

Spier’s commitment to conserving water is evident in its winery too. Among the winery’s extensive conservation measures are: 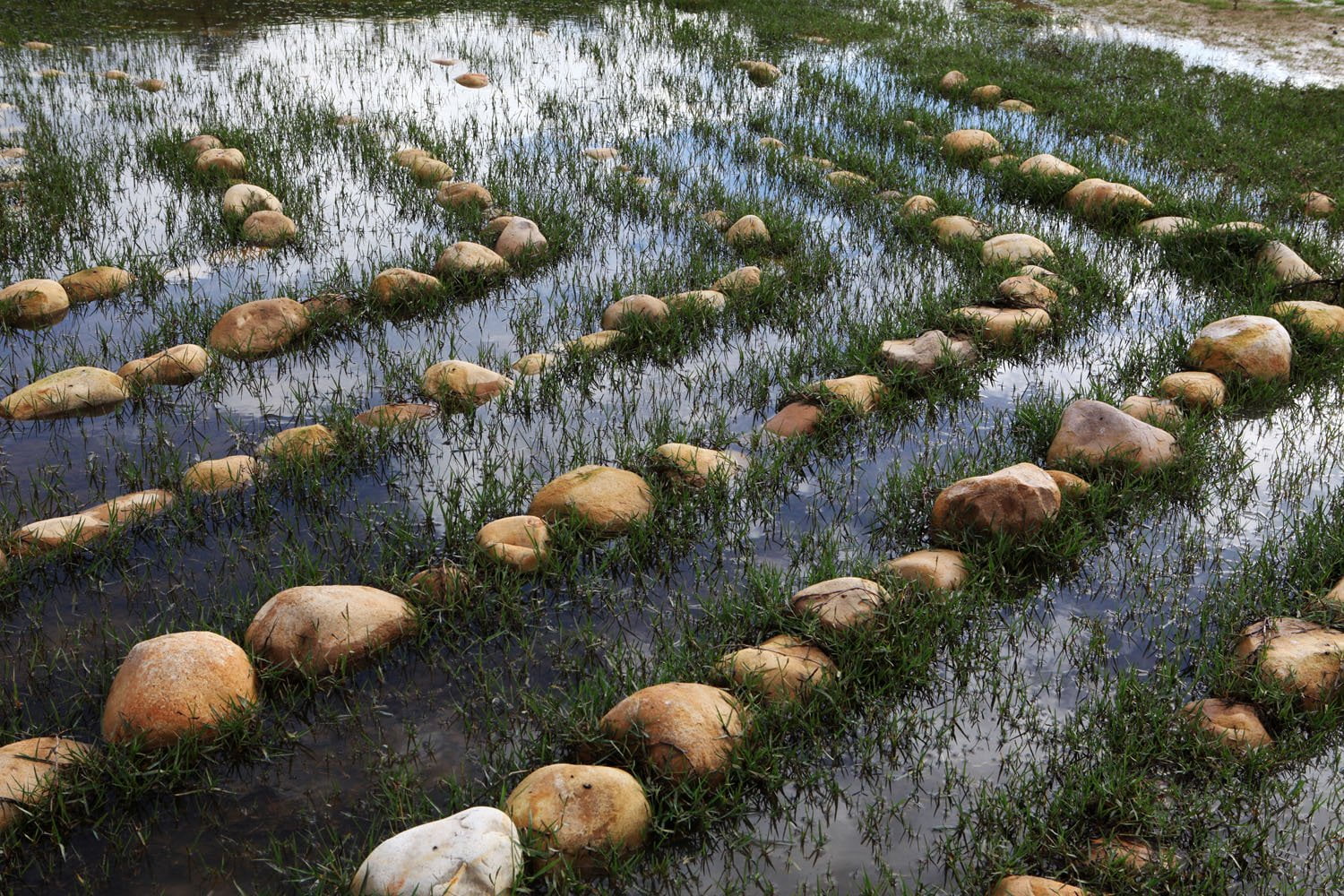 Spier has done a lot to reduce water consumption in the winemaking process. In 2013, its winery required 3L of water to make 1L of wine. By the end of 2020, the winery’s consumption had reduced to just 1,4L water per 1L wine.

85% of the egg-laying business at Spier was sold to five employees in a vendor-financed deal. One of the major benefits of the new shareholding structure is that the company can now access government funding and the leasing of state-owned property. Increased funding and space are key for the business to be able to grow. For the new owners, scaling the business to become a nationwide entity is the ultimate goal.

The Eggmobile has been gaining popularity with other small-scale operations popping up in parts of the country. Recently it received a lot of interest from South Africa’s national Department of Agriculture. In a bid to fund and expand the model to other parts of the country, it recently invited Farmer Angus EGGS (the egg-laying company based at Spier) to design an Eggmobile-based mobile poultry operation that produces 12,000 eggs per day and is fully off-grid. The funding for this is still under review but all meetings with the Department indicate it is supportive of this initiative.

Spier’s farming team is committed to nurturing a new generation of regenerative farmers and food growers. During South Africa’s first, hard COVID-19 lockdown in 2020, produce was contributed to 450 vulnerable families in nearby communities as part of relief packs. These packs were supplemented with seedlings and guidance on how to grow food. 11 families in Lynedoch have started food gardens to provide their families and community with nutritious food.

Carbon Emissions In Natural Winemaking – an article by MYSA